The 6 Reasons Why Pokemon is Getting Ridiculous 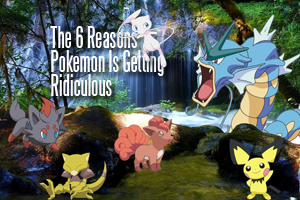 Pokemon became an instant classic the day it was released. Pokemon has since become the second most successful and lucrative video game-based media franchise in the world only behind the Mario franchise. The games are fantastic, but the T.V. show has always bothered me. There are such small things that always make me dislike the show. The show and game franchise has been unrealistic from day one, but there are some details that are making the franchise completely ridiculous.

6.  Pokemon can only say their own names.

People have been led to believe that Pokemon are supposed to be the animals of the Pokemon universe. No animal says its own name to communicate with other animals. Even in the Pokemon games the Pokemon don’t say their own names, they have poorly done computer growls, and noises. Not to mention if all Pokemon can only say their names then how can they even communicate if they are saying the same thing over and over again?

In Pokemon there are ghost pokemon, and for some reason they’re purple. Catching ghost Pokemon has been a mystery to people from the very start of Pokemon. They’re ghosts, wouldn’t the pokeballs fly right through them? Ash dosn’t use any special pokeball to catch them, he just throws a regular pokeball at them, it hits the ghost, and the ghost becomes caught.

4. Alakazam Would Rule The World.

3. Pokemon are forced to fight for entertainment.

Why has PETA not pointed this out yet? They catch wild animals, and make them fight until they get knocked out. That seems wrong from every angle of the situation. It’s as if the creators took the movie Gladiator, and put Pokemon in it.

Pikachu has been kicking butt and taking names since 1998. Ash choose not to evolve Pikachu, because Pikachu was to much of a beast for that. Pikachu has beat every Pokemon since the start of his journey with Ash. Pikachu has defeated Legendary Pokemon as well as the ridiculously strong Pokemon. Wait. Didn’t Brock’s Onix beat Pikachu?

In the very first Pokemon episode Ash left home at 10 years old. That was in 1998. I would like to believe people age in the world of Pokemon which means Ash turned 23 this year. Which means Ash has been hanging around underage kids for five years. How has no one noticed this? Why does he keep hanging around younger kids? Will he hang around them all his life?

Caption: Nothing disturbing about this.