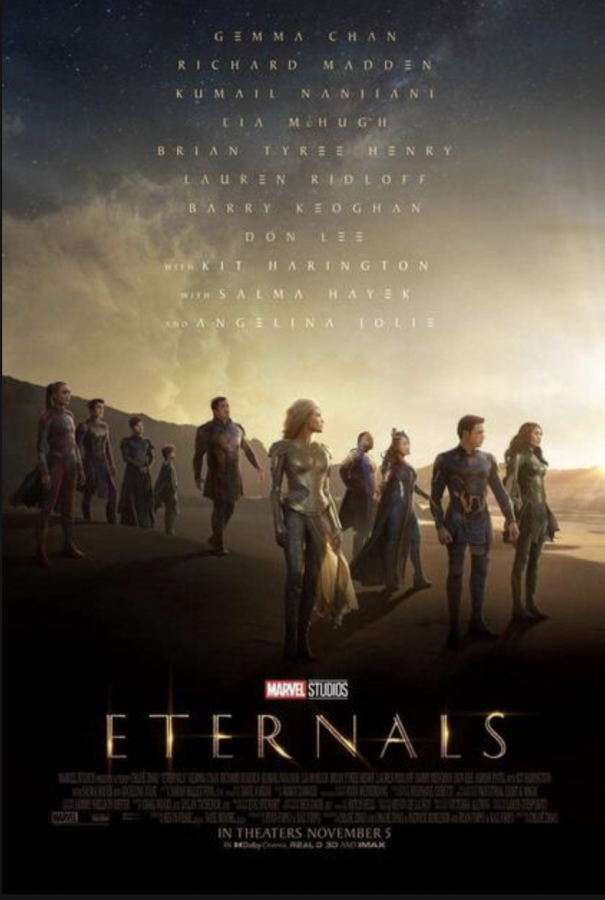 Marvel Studios introduces a new expansion to their universe “Eternals.” The movie follows 10 ancient immortal heroes who fight to defend intelligent life from Deviants, aliens that feed on humans and other life. The movie follows the basic Marvel Formula which leaves audiences and critics in between when it comes to the movie’s score. However, all of that can be made up for through sets and post-credit scenes.

The Marvel Formula contains a plot structure used in most Marvel Movies. It tends to focus on a hero that must overcome a huge obstacle with some help from friends or family. Toward the end of these movies, a new villain becomes established if they were not already introduced. Finally, the hero wins which presents a clear resolution. “Eternals” stuck to a majority of this plot, this creates a mediocre story. Although there were slight deviations to the formula at the end that saved the movie.

The actors and actresses were split when it came to entertainment. Actors like Don Lee (Gilgamesh) and Kumail Nanjiani (Kingo) created excellent and comedic characters. They both provided spectacular character arches.  However, there were some actresses such as Angelina Jolie (Thena) and Lia McHugh (Sprite) who presented very dull characters with motives that did not add up. These roles made parts of the story not as enjoyable and brought down the film.

The director, Chloé Zhao, chose to use fewer green screens and used places around the world like London, the Canary Islands and the Outback of Australia. London in particular created a realistic feel in the movie through the city view and people-environment interaction. Overall, these locations were successful in the creation of ancient themes and expanded on the idea of how long these heroes have been around.

The best portion of most Marvel movies follows the post-credit scenes and this theme continues in “Eternals.” The two scenes expand on the universe through the introduction of new characters and mystical items. For the biggest Marvel Fans, the scenes will hit home and provide excitement for those who have seen Marvel’s “Avengers: Infinity War” and “Avengers: Endgame.”

In conclusion, this Marvel film falls in between the best and the worst. An official score I could provide for this movie would be 60%. I hope to see future movies with real sets, better-formed characters and detailed end-credit scenes.