Theater Hosts ‘All Together Now’ 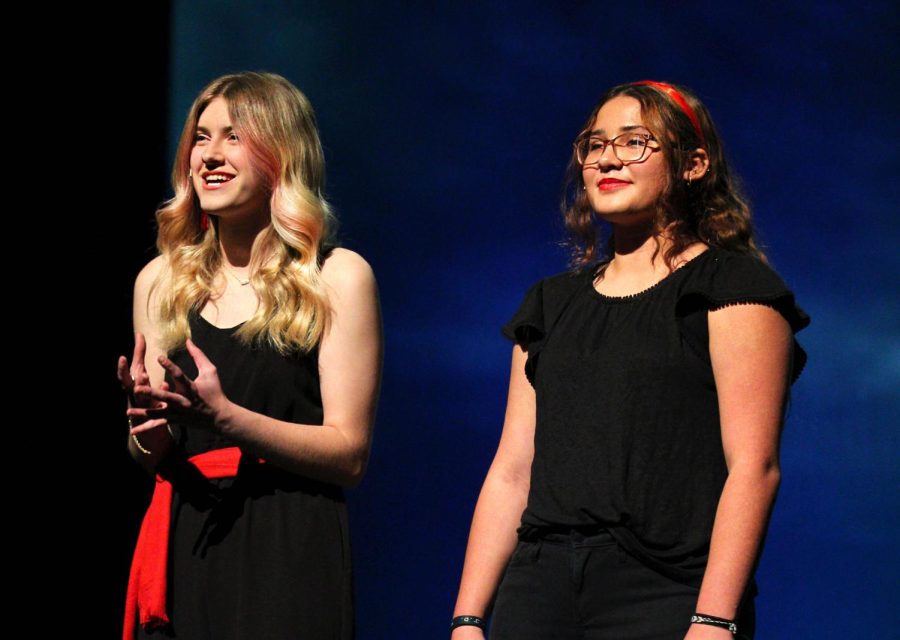 At the MISD Center for the Performing Arts, Annali Hollinger, 12, and Caelan Campagna, 11, perform "Meadowlark" from the musical, "The Baker's Wife."

Gathering in the Dr. Jim Vaszauskas Center for the Performing Arts at eight o’clock, all five Mansfield high schools sit in the auditorium with sleepy eyes and morning voices. Conversations of excitement pass between students as directors congregate on the stage. Mr. Jeremy Ferman, Legacy’s Theater Director, quiets the crowd with a smile and raise of his hands.

“Welcome to All Together Now everyone,” he greets with arms wide open. He then continues to explain how the day will proceed. As he finishes his directions, choir teachers Ms. Jill Baker from Lake Ridge and Ms. Tracy Carroll from Summit lead warm-ups. Students stand and warm their voices for a few minutes before taking their seats once more to begin rehearsal.

Students spike the stage and, eventually, they all get the chance to start run-throughs. With every school participating, students laugh, cheer and clap to encourage one another as everyone performs during rehearsals.

When it came time for lunch MISD Student Nutrition set up the pre-made packages of food in one of the conference rooms. Staying true to the theme of the show, all students mingle and sit with one another at the large round tables. Some people down their chicken sandwiches and turkey sandwiches without question while others sip their water slowly and barely touch their food because of their nerves.

Finally, everyone eats a little bit of something and returns to the auditorium for a final run-through. All goes well, each performer singing louder and dancing harder than the last time. As they gather for the final song ‘Seasons of Love’, they sing it a final time before Mr. Ferman announces a break, an hour and 45 minutes to get ready and return to The Center before the show starts. Quickly, students say their goodbyes and return home to change and get ready.

The hour and 45 passed before everyone returned now dressed fancy in suits and dresses. Each school wore wear black and white with an accent piece of their school color. Students gather backstage, compliments fly to one another about how good they all look, and conversations about nerves pass along between a few. Soon enough the teachers join them backstage and lead warm-ups for the last time.

After a successful warm-up of lots of mouth stretches and stress relief, everyone makes a circle for the final time of the day to do their Legacy’s performance ritual. Mr. Ferman leads the exercise and asks everyone to join hands and yell “energy” to the person to their left. As the word trails around the circle, everyone chants and whoops in excitement. Next, everyone recites “the theater is magic and magic is in the theatre, all for one, and one for all” before sticking their feet in the middle of the large circle and yelling “break a leg.” Lastly, they cheer loudly and spin out.

Once the circle breaks, Mr. Ferman and theater teachers place everyone backstage. At 7 p.m., the curtain rises on three girls from Mansfield. They perform just like they practiced, starting the show off right. Once their number is done, the crowd claps and cheers as the next number takes position.

Students, thrilled and nervous, stood with their friends and wore a wide smile visible in the dimmed lighting. People stay back and watch their peers perform loud and proud. As the adrenaline continues to run high, the show comes to an end near the hour and a half mark.

For the final performance, all of the students surround the auditorium, mixing schools and sound parts, emphasizing the meaning of All Together Now. ‘Seasons of Love’ plays softly on the soundboard as the student’s voices carry and cover the auditorium. Decrecendoing out the last note, they grab hands and bow to the audience that cheers and claps for them.