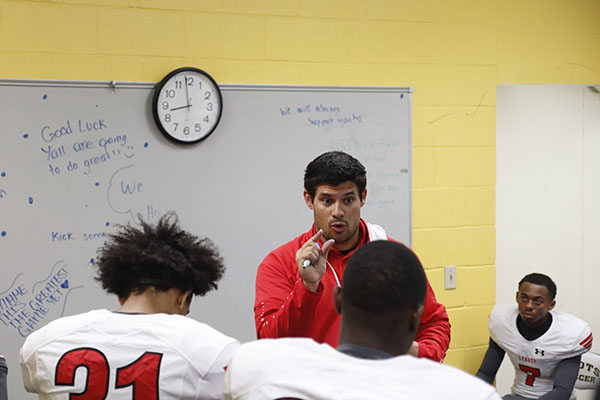 Coach Joe Martin discusses pre-game strategy with the football team prior to the game against Highland Park.

The boys rushed through the double doors of the fieldhouse as they headed straight for the locker rooms. Head football coach Chris Melson walked out of the film room to find stragglers still in their school clothes. He patted their backs and pointed in the direction of the weight room. Athletic trainers prepared bottles of water for the players, football managers set up the timer and the other coaches discussed what practice would look like.

Frost in the air accumulated as the players ran out almost at the same time with deep, heavy breaths. All over the field, managers shifted pads until they looked right, boys jogged to warm their bodies up and coaches sang chants of encouragement. With the wave of a hand, all the players ran to the center of the field in a huddled up position.

“Let’s beat Lone Star. We can do this,” Coach Thomas said.

Soon after, the clock started, and drills began. In lines of ten players each, the boys performed each drill with coaches on their tails. The shrill sound of the whistle pierced the air and that stopped floor sweeps and strip drills. As though the whistle signified a special language, they broke up into offensive and defensive teams to work on plays and passes.

“With the ball, run it again,” Coach Melson said. “On the snap, don’t put your hands on the outside of the receiver.”

Sophomore Bradyn Love ran back to his position in the lineup, but his eyes flashed toward the timer. He noticed their time on the outdoor field was almost up. With more enthusiasm, he focused his vision range on the center alone. The snapped ball flew into the hands of the quarterback as the wide receivers tried to outmaneuver the defenders and catch the pass. The coaches did not seem satisfied by that play.

The boys gathered in another huddle where they spoke more words of encouragement and constructive criticism. Soon after, they filed onto the buses to continue practice at an indoor field in Kennedale.

On Nov. 15, the team will play Frisco Lone Star in the first round of playoffs in the Ford Center at the Star at 7:30 p.m.