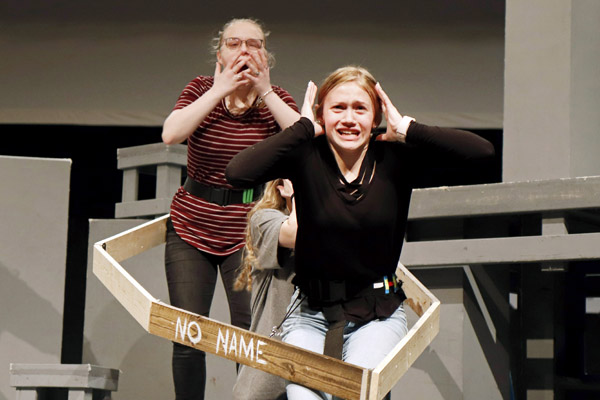 Hannah Reetz, 10 and Tara Cyganowski, 10, rehearse the upcoming show "Men on Boats" after school. The cast and crew advanced to bi-district and will compete Thursday, March 28.

The final performance of “Men On Boats” will take place at the PAC on April 17 at 8 p.m.

The cast and crew will perform at area on Friday, April 5 at Keller High School.

Legacy’s theater department advanced to the bi-district round for the UIL One Act Play. Their show is titled “Men on Boats” by Jaclyn Backhaus and tells the story of Jack Powell and his expeditions in the Grand Canyon.

“We were all a little skeptical about how the show would turn out, it’s very different than things we’ve done in the past,” senior Katy Thomas said. “After going through the process and after we nailed down exactly what we were gonna do, I can say now I love the show and I think the entire cast and crew is really on board with our vision of what we’re doing.”

“Most of the reason I can be strong in my performance is that I can trust my castmates,” Thomas said. “Because they trust me and I trust them we can build each other up and I can establish to the audience and to the judges that I am this character in this leadership role.”

The theater department will host the bi-district round all day Thursday, March 28. Legacy performs at 11 a.m., and the fine arts hallway will be closed to students throughout the day. Winners of bi-district will advance to area at Keller Central Highschool.

“[District] went great. We had a little mishap with a sound cue, but those small things don’t really matter in the grand scheme,” Thomas said. “Bi-district is on Thursday and we are hoping to just do our best to advance to area.”