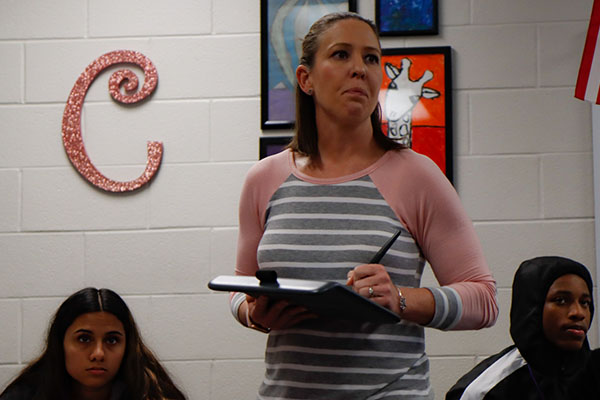 While students are home for Christmas break, Ms. Makisha Castor, the new Algebra 2 teacher walks to her classroom. She feels nervous on her first day of school but was eager to start meeting new people.

Because of Ms. Angela Curry’s decision to retire, Ms. Castor had an opportunity to take a math position at Legacy to replace Ms. Curry. Ms. Castor began teaching in the second semester and believes her energetic personality resonates with her students.

“I’ve had a few students say they like the change from last semester to this one,” Ms. Castor said.

Ms. Castor went to West Texas A&M to become a teacher and really enjoys math. In 2002, she graduated from university and started her math teaching career.

“I saw it as a natural fit and it’s kind of my calling,” Ms. Castor said.

“It was definitely a change from where I came from,” Ms. Castor said. “I like having the variety, all students have a different thing.”

Although Ms. Castor hasn’t been at Legacy all year, she believes she has been able to adapt to this new school with the help of the teachers and students. Her attentiveness and patience with her students help the students do better in class.

“Being a creature of habit, I have had to learn new routines and procedures that are specific to this campus,” Ms. Castor said. “I have adapted fairly quickly.”

Junior Jayda Wilson finds it easier to adapt to this learning environment and trusts herself to get better grades.

“She’s nice and really laid back,” Wilson said. “She gets her work done and I know what’s going on.”

With a positive outcome from students and a healthy work environment, Ms. Castor has had a good experience coming to the new school.

“ I have been very happy coming to Legacy,” Ms. Castor said. “Everyone has been very friendly and helpful and the students are eager to learn Algebra II.”