UIL Suspends All Athletic Events Until May 4 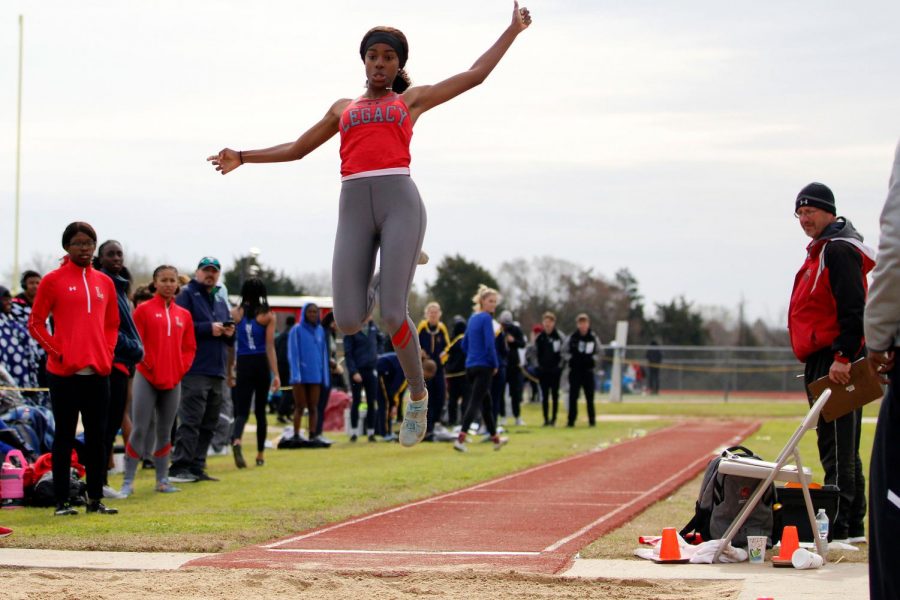 Rachel Darden, 12, jumps into the pit during long jump at the Bronco Relays on Feb. 22.

The buzzer ends. The team huddles around their coach and begins the celebration. The boys’ soccer team just became district champions and defeated Crowley 2-1 in the last regular-season game of the year. That happened nearly a month ago, most likely the last time those players would ever play together.

Due to the Coronavirus outbreak, UIL suspended all athletic activities until May 4. It is hard to tell whether or not they will ever resume. The boys’ team stood the chance to make a deep playoff run this year and senior Conner Contreras, also team captain, feels frustrated with the whole situation.

“It’s just disappointing. We did everything we could do and did it right so that we’d be champs. It’s sad we won’t be able to see how good we truly are,” Contreras said. “Especially with this being my last year. But that’s just how life is, you take it and move on.”

All senior athletes can account for how much work they put into their sport and for part of, if not most of their last season to get stripped away could be heartbreaking. The disappointment resembles the truth for seniors such as Contreras right now.

“It feels like we have been robbed,” Contreras said. “Everything was lined up for us to go far in the playoffs. It’s heartbreaking to know that there’s a chance I’ve played my last high school game without even knowing it.”

Just as Contreras did not know he probably played his last game, senior Rachel Darden may have competed in her last high school track meet.

“It hurts knowing that I might now get another chance to be on a runway or maybe or maybe even get the chance to jump at state,” Darden said. “Going through this feeling by myself being the only senior on the girls’ team makes it even harder to deal with.”

Darden competed at the state championship in 2019 and won, but she anticipated a repeat this year. She hoped to break the state and school record in the triple jump; now Darden just hopes her senior year can return to some sort of normalcy.

“Knowing the situation could get worse, I can’t even stress about track at this point,” Darden said. “It’s more about graduating, getting to have a prom and having senior skip day. We’re living in a time of the unknown, and not knowing if we get to do the senior things we dreamed of is what feels like is at stake.”

On the other hand, the seize of play due to the virus also affects athletes from getting looks for the next level. Junior Alika Crawford believes the road becomes a lot more difficult to get to the collegiate level for track.

“It’s harder now because I only have one year left. So instead of getting looked at this year and offered this year, it’ll be next year,” Crawford said. “I really feel for the seniors on the team that don’t get scholarships because it’s a really tough situation for them.”

As track had only gone halfway into their season, Crawford also feels upset about the possibility of not being able to finish, but she understands how lucky she is to have one more year.

“It’s actually really depressing to be honest because I feel like we all just started and never hit our peak yet,” Crawford said. “But for [the underclassmen], we all get a second chance next year and we’ll have motivation to be even better next year.”