Opinion: Athletes Have Right to Kneel 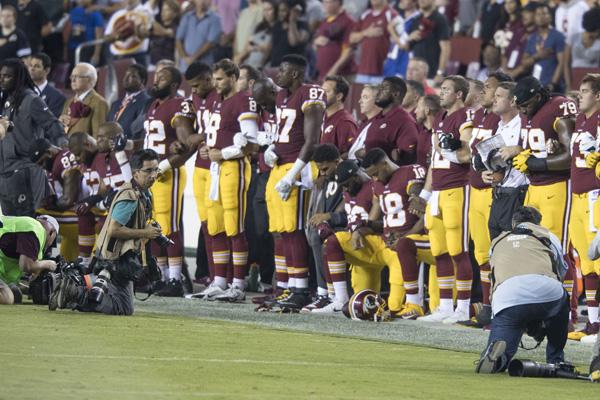 Used with permission from Wikimedia Commons

The staff reflects on whether or not NFL players have the right to kneel.

Every Sunday, millions of Americans gather around TVs or crowd in stadiums to watch NFL football. Sports bring people together, usually despite race, politics and other issues going on in our country. Starting from the beginning of the season and even stretching all the way from last year, politics became a key component in America’s game.

Last year, San Francisco 49ers quarterback Colin Kaepernick made a statement by kneeling during the national anthem. Kaepernick later said he couldn’t stand for a flag that represents a country where racial injustice and police brutality remains a major issue.

Then on Sept. 22, President Donald Trump held a rally in Alabama where he criticized the NFL for not suspending or firing the players who kneel during the national anthem, calling them an expletive.

People may not think these protests affect us as a school, but it has the potential to. How far does this go?  The national anthem is played before football games and other Legacy sporting events. Whether or not a student stands or kneels should not matter. Student have First Amendment rights on and off the field.

In Texas, students say the pledge of allegiance, the Texas pledge and have a moment of silence. According to Texas Education Agency, schools are required to have those three things, but students don’t have to stand for the pledge. Some students at Legacy choose not to recite the pledge. And there is nothing wrong with a student’s decision to do so.

If students don’t have to stand or recite the pledge, why can’t players kneel during the national anthem?

Maybe students can find different ways to peacefully protest. For example following other teams like the Dallas Cowboys who chose to lock arms and kneel before the national anthem was played at the Sept. 25 game.

As a community, we must learn to understand everyone has the right to protest, whether you agree with it or not. NFL players are doing so peacefully. This isn’t about what you agree or disagree with. This is about a person’s right to peacefully protest. We must learn to accept people’s rights, yet, we must do so in a respectful manner to give honor to those who paid the price and gave us that right. By doing so, we can come together instead of being divided.