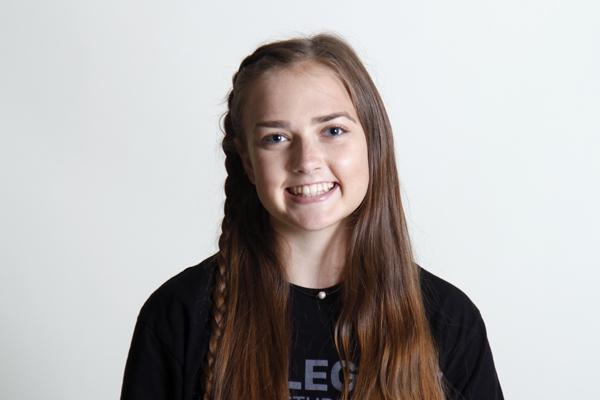 When people hear that I have a 504 plan they look at me like I’m from another planet. They have no idea what I’m talking about. Trying to explain it a different way every time doesn’t really work, so I’ve perfected a speech: “My brain doesn’t process things in a certain way, so I get accommodations to help. I’m allowed extra time on math and science test by 50 percent, preferred seating and teachers can’t count off for spelling if I don’t have a wordbank.”

I always get the same reaction when people hear this: “You’re so lucky!” No, I’m not. I get accommodations because I struggle doing simple things – not because I’m lucky.

Remember those timed multiplication test in elementary school? Everyone would compete to see who could finish first and laugh about it when they finished. Not me. I never finished those. Not once. I would always fail and have to come in during recess to correct it. I would study with my mom every night and do a bunch of practice tests, but nothing worked. My brain doesn’t work that way. I would have to sit there, write it out and add to figure out what eight times six is. To this day I don’t know my multiplication facts and I can’t do math quickly.

But I understand it and I know exactly what to do.

I struggle in math class not because I don’t understand what’s going on, but because my brain is slow. Everyone is moving on to the next problem, and I’m trying to figure out what seven times 12 is on the first step out of eight. Every once in a while we will have a partner test or quiz, and everybody wants to be my partner. Not because they think I’m smart, but because I get extra time. And honestly, it horrible feeling like I’m being used. Because I am.

And spelling. Don’t even get me started.

I cannot spell to save my life. I tell people this and they say “Oh yeah. I’m bad at spelling too.” No. You don’t understand. I’m not bad at it, I physically CAN’T do it. People will tell me to just practice and I’ll get better at it. That’s like if I told someone to jump off a bridge and fly and they’ll get better at it if they practice. You can’t get better at something you physically can’t do.

People don’t understand that I can’t do these things.

When I turn to the person next to me in class and ask them how to spell assistant (asistant? assisstant?) or some other word that shouldn’t be that hard to spell, they give me dirty looks or sigh or tell me to sound it out, but I’ve already tried that. I can’t pull out my phone in the middle of writing a short answer question and I definitely (definatly? defanitly?) don’t have time to get a dictionary on a timed writing assignment.

No matter how hard I try, I can’t spell what people consider to be easy and simple words, and nothing you tell me is going to change that.

Although these things can make it hard to keep up with the class, I don’t let them get the best of me. Getting extra time and not taking off points for spelling definitely helps, but I can’t take advantage of that. I still have to study for math tests, and I can’t use the excuse of not being able to spell if I have the time and availability to resources that help. I’ve had to learn how to deal with these things by memorizing certain multiplication facts and adding or subtracting from there or trying to remember one more letter in a word so hopefully one day I’ll learn how to spell it.

These complications make it harder to do things, but not impossible. I’m still fully capable of learning and getting straight A’s, I just have to work a little harder for it.

Many people have a 504 because their brain can’t process something in a certain way. High school is a place for people to figure out who they are and what works best for them and some people have a little extra help when it comes to figuring out how they best learn. And that’s okay. Everyone is different and while having a 504 is a part of you, it doesn’t define you.