10 Cover Artists To Listen To 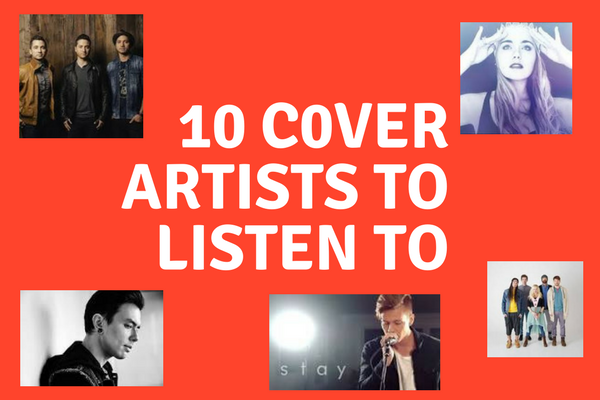 Cameron Dudsinski, writes about the best cover artists on YouTube.

The world of music, filled with many original artists of music who produce music for us to listen to daily. Unlike people who write music, this list tells about famous and popular cover artists of Youtube that cover current music and bring a new taste to the world of music.

Amanda Lee
Further known as Amalee, she’s a cover artist on youtube as LeeandLie. She’s well known for her silky smooth voice that flows well with her lyrics. Amanda posts covers of anime and video game music but also makes original music such as her newest debut album Hourglass. Instead of just singing a direct translation of English or Japanese lyrics, she writes her own, gets personalized art to go along with it and a track made to go along in one video. Amanda’s known for her tradition of making covers of songs to diss her haters on April Fools, mostly due to the fact that she writes her own lyrics. She has a personalized page dedicated to her songs lyrics, and how to write your very own.

Nathan Sharp
Another popular youtube cover artist would be none other than Nathan Sharp, or Natewantstobattle. Like Amanda, he covers over anime and video games. He also does anything mainstream or very popular, such as Panic At The Disco’s “This is Gospel”. He’s also done duets with Amanda Lee, as they’re very good friends, such as Paramore’s “Still Into You”. In March of 2016 his original album Sandcastle was released. Along with being a cover artist on youtube, Nathan’s also a voice actor for Funimation and voices a wide array of characters.

Cimorelli
Made up of six sisters: Christina, Katherine, Lisa, Amy, Lauren and Dani, they make up the band Cimorelli. Their music consists of a cappella singing with occasional instruments. With many popular songs they have sung such as; “Problem” by Ariana Grande, and “One Thing” by One Direction. They first started out as a basic video production, but a spike to the future has improved their quality of their videos, mainly since gaining their own music label.

Walk Off The Earth
Canadian indie rockers Walk Off the Earth first became known for their music videos of covers and original songs. All of their videos include a cool gimmick or style that makes them more unique, whether it be the group playing one guitar at the same time or moving to an acapella. The group’s look has become equal parts visually and musically pleasing and their striking harmony can make even the most simple song sound like a masterpiece. They have covered many popular songs such as: “Somebody That I Used To Know,” “Shape of You,” and “Royals.”

Tyler Ward
Youtuber Tyler Ward originally enrolled into the Air Force, but found his personality unfit for the branch of the military, and instead pursued his true passion for music. His style of music consists of rock, country and pop mixed together. Tyler includes a lot of instruments and different artists into his covers. Instead of using already made tracks of his music, he uses musicians to make his cover music, setting him aside and similar from different cover artists. He’s known to have beautiful and well composed covers, such as; “What It’s Like To Be Lonely,” “Somewhere With You,” and “If I’m Being Honest.”

Sam Tsui
Unlike many male cover artists, Tsui had been made notable in the music industry for covering songs mainly from female artists. His natural high ranged voice gives him the ability to sing a hard song like “I Will Always Love You”. His own unique quality to his music by mashing two to three songs together and singing them octaves higher than the original writing. His mashups such as “Imagine Dragons Mashup” show his creativity as he beautifully combines his music into one mashup.

Kurt Hugo Schneider
Having one of the most subscribed music channels with 9.8 million subscribers currently, Kurt holds the title of not only a musician, but a tastemaker for other channels. He does a lot of covers of his own, but Kurt also hosts other cover artists on his own channel like Sam Tsui. Instead of titling himself as a cover artist, he claims to be a “music producer,” hence the reason he hosts other artists on his channel. His 2017 mashup starred as one of his most popular videos, receiving over 2 million views and legitimizing his rising popularity as an artist and producer.

Alex Goot
A one man band of a single cover artist, he produces songs of old and new hits. Alex’s talent of being a multi-instrumentalist who plays everything from electric guitar, acoustic guitar, and bass makes his channel unique. Alex’s instrument abilities allows him to be a one man band in his videos as he not only sings, but plays the instrumental parts of the songs. His covers have been made apparent in the music industry and have collaborators work with him such as Madilyn Bailey.

RANGE a cappella
A New York City based a cappella group comprised of many artists that come together to produce Broadway musical covers acapella style. Each of their songs consists the entire group in their own specific roles to produce covers from famous musicals. Their most popular video was their cover of “Hamilton in 7 Minutes” in which they combined almost all of the songs from the Musical “Hamilton” and sang them together in exactly seven minutes. The group all has their own unique styles, and when putting that together with their ranges, it makes a beautiful symphony.

Boyce Avenue
This group consists of all brothers well known for performing acoustic versions of pop hits such as “Mirrors” by Justin Timberlake. Part of Boyce Avenue’s unique quirk comes from their self-made music label who has begun to sign up-and-coming artists. This helps to make them one of the most viewed artists of covers and music together. These brothers became one of the most listened and viewed artists in the category of music on Youtube, making them a very nice group to finish this list with.