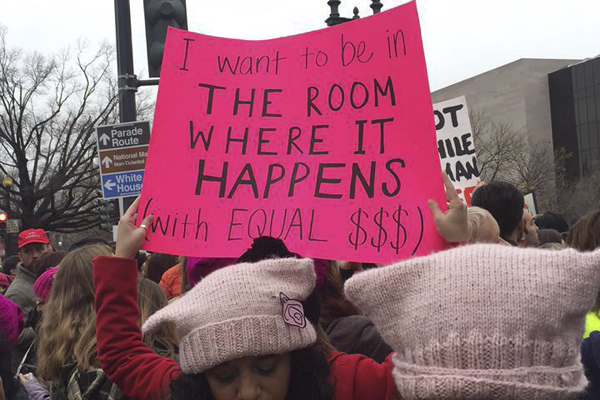 A web page on the feminist movement in the 1960s loads as senior Natalie Ponder works on her controversial topic essay. She reminisces on the event that created this passion for equality. She remembers the chain of people pushing through the crowd formed in the streets of Washington, D.C., The hand that slipped out of the grasp of another, the group splitting in two. One part of the group moving toward the Smithsonian while the other five students remained trapped in the crowd.

While on a school trip to Washington, D.C., in 2017, Ponder unintentionally joined the Women’s March. The grassroot protest followed the inauguration of President Donald Trump on Jan. 21. The event focused on gaining attention for ending violence, environmental justice and reproductive, LGBT, workers, civil, disability and immigrant rights.

“A lot of key feminist issues still need to be addressed in today’s society,” Ponder said. “The fact that so many people showed up, men and women alike, to speak our message so that the president could hear I thought was pretty cool.”

Ponder, at the rear of the line of students, stopped walking as a wall of people separated her group. Former student Carly Russell, wearing a Make America Great Again hat, tried to push through the people to rejoin the group, but met restraint from the crowd. A former Legacy student grabbed the hat off of Russell and put it in his back pocket, promising to give it back after they reunite with their group.

“It was so scary. To a certain extent she had the freedom of expression,” Ponder said, “but we were lost, had a bunch of strangers around us, in a different state. We didn’t know what we were doing. We just had to be mindful of where we were. We couldn’t put ourselves in danger.”

The five students navigated through the crowd talking to various women in the process. Out of kindness, multiple protesters offered the students food, water and Women March hats when Ponder explained their situation. Ponder interacted with people aging from toddlers to elderly women asking them why they were marching. One young girl stood out to Ponder. She held a sign with a reference from the Broadway musical “Hamilton” saying  “I want to be in the room where it happens” with facts about the low women representation in congress and senate.

“That’s the sign that stood out to me the most because it’s really hard hitting,” Ponder said. “There’s many women in America and not just white women. There’s people of color and there’s transgender women and none of them are being represented like they should be within the United States. So for her to be so young and bring light to that just stood out to me a lot.”

The crowd came to a standstill and personal space turned into an unachievable commodity. A man stood so close to Ponder her hair would get caught each time he crossed his arms. She would shuffle, freeing her hair but minutes later Ponder felt hard tug again making her stumble backward. This happened over and over and the man never seemed to care. While in this dance with the man, Ponder heard Madonna, Alicia Keys and other artists perform and speeches given over the speakers.

The crowd started to march forward and Ponder squeezed her way to through it looking for somebody who could point her and the other students in the right direction. She came across one of the founders of the event organizers who gave her directions to the Holocaust museum. She finally escaped after navigating the dense crowd for eight hours. They met up with trip sponsor and history teacher Shelene Andersen and the rest of the group on the steps of the museum.

“There was no going back for them [when they were seperated]. There were too many people and shouting didn’t do any good,” Ms. Anderson said. “Everything worked out fine. The trip continued and we had a phenomenal time.”

The day out in Washington, D.C., ended and the now complete group went back to the hotel. Ponder missed all of the planned events, but said it was a happy mistake.

“I was a little bit disappointed though because I missed the holocaust museum and the smithsonian because I was gone all day, but I wouldn’t trade it,” Ponder said. “I would still rather attend the women’s march. I didn’t know that at the time but that’s what I would have rather done.”

Ponder said she felt like the experience inspired her and led her to research the issues further. She has written multiple papers for school on the wage gap and feminism throughout history in America.

“While we were there I got to experience so many cool things,” Ponder said. “The signs, the people coming together and the speeches were phenomenal. I really loved it and I would really not mind to be apart of another protest on purpose this time.”