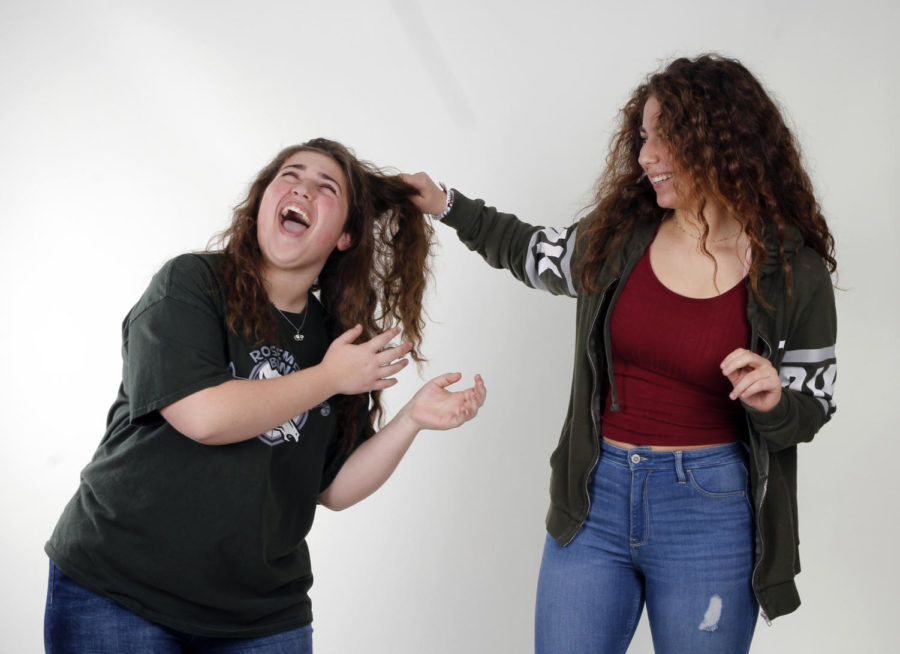 Hannah and Haley Oliverez, 10, pose for a photo in the studio.

As they walk through the glass doors and into the cafeteria, the girls only hear the noise from loud murmurs and conversations. Anxiously, freshmen Nichole and Kaiyla Carlisle scan the room and looked for where to sit. They find a table and sit down together. The cafeteria starts to fill up, and their friends begin to notice them, then join the twins at their table.

“On the first day of freshman year, walking in with my sister gave me a sense of safety,” Nichole said. “I didn’t have to come in alone or look for someone to sit with.”

The Carlisles attend school, from elementary to middle, together. They took the same classes and had the same teachers. High school became their opportunity to come off as independent people and not as a collective set of people.

“I find it weird not being in the same classes as my sister, but I like this new found freedom,” Kaiyla said.

Fraternal twins develop different hobbies, personalities, and even statures even though they share 50 percent of the same DNA. Sophomores Hannah and Haley Olivarez fall under the fraternal category, they could not be any more different. They do not take interest in the same things, or even have the same group of friends.

“We have similar friends but not the same friend group,” Haley said. “Like when I go hang out with friends, she doesn’t, but she’s friends with my friends and I’m friends with her friends.”

One of the biggest things that differentiate the Olivarez twins is their varying choices in extracurricular activities. After they started high school, Hannah chose to partake in theater and Haley dove into sports, specifically soccer. They both support each other in what they do but in no way do they venture into one another’s interests.

“My sister is very sporty. She’s played basically all the sports,” Hannah said. “But in my free time, I prefer to read or write. She’s more social with her time than I am.”

Some questions that twins are tired of hearing include “can you read each other’s minds?” or “what’s it like being a twin?” Twins may look alike or even act alike, but they do not always feel the same things.

“People think we have this weird connection, and being a twin is cool but it’s not insane like that,” Hannah said. “At the end of the day, it’s just like having a sister who was born at the same time as you. It’s fun and interesting but we are not telepathic with each other.”