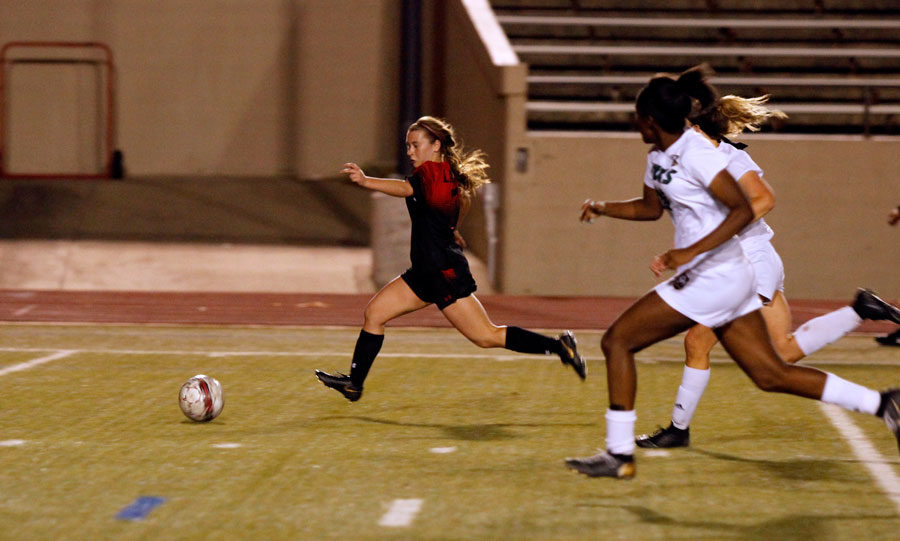 Brigid Murray, 12, dribbles the ball toward the goal in the playoff game against Birdville.

Senior Kaylee Murray dribbles the ball down field. She looks up at the goal, then at her teammate running toward the goal. She then focuses back on the ball and crosses it to teammate Olivia Jackson who takes another step and then taps it into the back of the net. The Broncos went up 1-0 within the first minute in the Regional Semifinals match against Burleson.

Girls Soccer won the first three rounds of the playoffs. They defeated O.D. Wyatt 10-1. The team escaped a close on against Birdville, winning 3-2 in penalty kicks and easily passed Burleson with a 3-0. The Broncos have scored 102 goals this season while only giving up a total of 12 goals on the season. Senior Outside Middle Back, Bridid Murray believes the team is communicating well and its contributing to their success.

“One thing we’ve done well in the postseason and in district is communicate with each other. We always have each other back and are there to step in and help a teammate when they mess up,” Murray said.

The girls are set play Aledo in the Regional Semifinals. Aledo defeated Amarillo 3-1, Chaplin 5-1 and El Dorado 3-2. Aledo is 19-2-5 on the season. Both Aledo and Legacy have played Birdville this season and both games ended in a tie. The Bearcats have scored 86 goals on the season while giving up 19. The winner of the game will play the winner of Burleson Centennial and Lubbock Coronado in the Regional Finals. Murray believes in her team, and says no matter what adversity comes their way they have to fight through it.

“If we want to play beyond Friday we have to communicate. And no matter what happens in the game we have to never give up and just keep playing hard,” Murray said.

Head Soccer Coach Zachary Hallack moved to Legacy from Chisholm Trail and took over as head coach in 2018. Hallack, in his second year of coaching at Legacy has already taken his team to the playoffs both years. Hallack would say the most admirable part about his team is their big hearts.

“The girls have heart. In everything they do, whether it be practices or games or just being with each other they all have big hearts. They are really all family. They don’t think about themselves and they play for each other and you can’t coach that,” Coach Hallack said.

The girls have scored 16 goals in the playoffs and according to Coach Hallack if the team just plays how they’ve been playing–they can beat anyone.

“We got here for a reason and I tell the girls to just play their game, go out there play hard and physical. If we do that I think we’ll come out winners. There’s good senior leadership and they’re just so coachable. They have a passion for the game and they want to win. The success is 100% on them,” Coach Hallack said.

The team will play the Aledo Bearcats at 6 p.m. at Memorial Stadium in Wichita Falls.