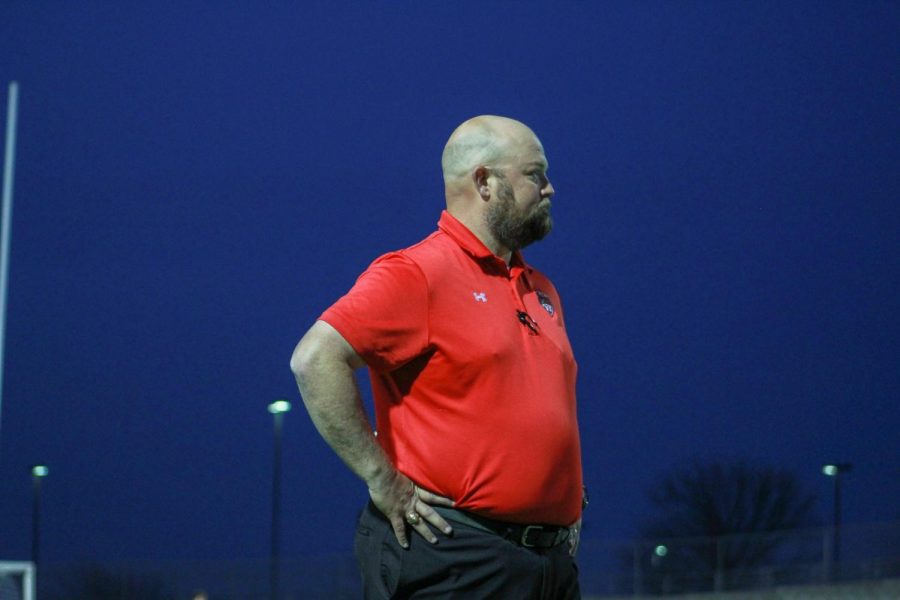 Coach Michael Keel observes his players during a varsity game.

Before the abrupt end of the soccer season, the boys’ varsity soccer team won the title of district champions. Under the supervision of Head Boys Soccer Coach Michael Keel, they stood a chance of a successful playoff run. This would have marked two consecutive years of the team’s playoffs journey.

In mid-April, UIL announced the District 5-5A awards. Upon tens of academic and team nominations from the players, there remained only one District Soccer Coach of the Year: Coach Michael Keel. Though this signifies a personal accolade for him, Keel credits his selection to the efforts of his team as a whole.

“This award reflects the team’s hard work from offseason through the season,” Keel said. “I strive not for personal acclimation, but for the success of the team.”

Changes in the focus during the offseason and practices caused improvements throughout the whole team. Senior Bruno Gallegos said this shift boosted performance and kept the team ready.

“[This year] he kept us healthy by adding recovery practice after every Tuesday game,” Gallegos said. “This was very important because it kept the whole team from being sore and allowed all of us to perform even better.”

Certain coaches possess the ability to influence their players outside their respective sport. Coach Keel provided his players with guidance on and off the field.

“He’s influenced me tremendously, always pushed everyone and myself to be better by proving us that effort wins games,” Gallegos said. “He always believed in us and we believed in him.”