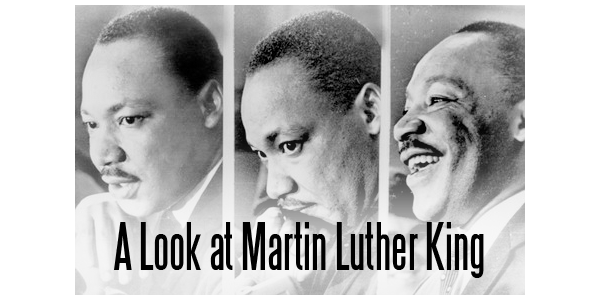 Here are some interesting facts about Martin Luther King.

Birth name: Michael Luther King Jr
His father was also named Michael Luther King, but changed his first name to Martin when he became a minister. The younger Michael changed his name to Martin as well, initially against his father’s wishes
Was a Trekkie (a fan of the original “Star Trek” (1966) TV series)
Is portrayed by LeVar Burton (an actor from Star Trek The Next Generation) in Ali (2001)
Encouraged Nichelle Nichols to remain on the original “Star Trek” (1966) series (according to William Shatner’s “Star Trek Memories”)
Is the only U.S. citizen to have a national holiday dedicated to him
January 20, 1986 was the third Monday in January, and consequently, the third Monday in January is an official holiday in the U.S. honoring Dr. King. To date, all 50 states observe the King holiday
Won Nobel Peace Prize on December 10, 1964
Was stabbed in 1958
Graduated from Crozer Theological Seminary in Chester, PA, with a B.D. in 1951
Became pastor of Ebenezer Baptist Church in 1960
Earned Ph.D. in systematic theology in 1955
Time Magazine’s “Man of the Year” (1963)
Subject of the U2 song “Pride (In the Name of Love)” from their 1984 album “The Unforgettable Fire”
He stated that he would not live to be 40. He died aged 39
Among his personal, non-violent reform heroes was Mahatma Gandhi (1869-1948)
During the funeral, his casket was pulled by a mule-driven cart down Atlanta’s main street
Was a vegetarian
He could shoot a basketball accurately with both hands
He went to college when he was only 15 years old

Take an online quiz to see how well you know Martin Luther King.