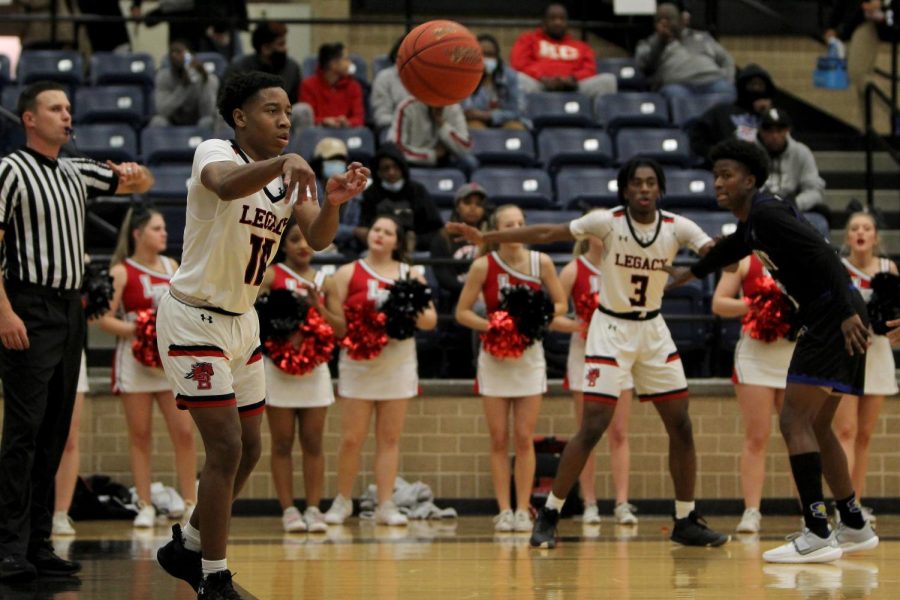 Boys varsity basketball finished the season with a two-point loss against Timberview.

The Broncos completed their season with a 24-8 record. They finished third in district losing to cross-town rivals, Mansfield Summit and Mansfield Timberview. Third in the district slot, the Broncos earned a playoff spot, and they won their two playoff games against Arlington Heights and Birdville High School. However, the Broncos ended their season with another matchup against Timberview with a heart-breaking, overtime loss of 60-62.

Dejuan Sims, 12, has been a member of the team all four years, and he’s picked up many Division 2 offers to further his academic and athletic career.

“I wanted to go out giving everything I have,” Sims said. “I didn’t want to look back and say I didn’t do everything I could to win the game.”

Sims says his four years in the program taught him more than just a game.

“I’ve learned how to adapt and how to overcome obstacles, ” Sims said. I think the Legacy men’s basketball program has prepared me for the real world.”

Coach Cornelius Mitchell encountered several hardships. Whether it was through injuries, chemistry or the win-loss column during district this season.

“District was different because we started the year losing our best player,” Coach Mitchell said. “When you lose a player you don’t know who’s going to step up. We were trying to figure out new roles and whose we are adjusting during the season.”

A Timberview versus Legacy matchup always packed the stands and is a guaranteed thriller to watch. However, over the past couple of years the Broncos haven’t beaten, and like this year, had to watch the Wolves go deep into the playoffs.

Coach Mitchell said at any given time his team could and will beat Timberview.

“My biggest takeaway from this is just never underestimating players and teams,” Coach Mitchell said. “They’ll always surprise you.”