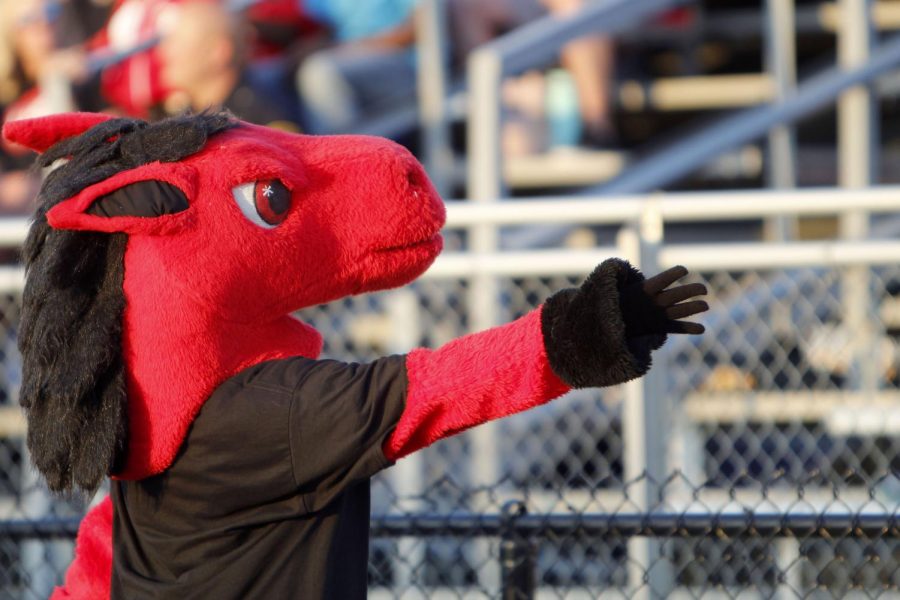 Maisy Inlow, 10, mascots as Bucky at the Blackout Game against Crowley.

Bucky the entertainer, the crowd-pleaser, the dancer, the troublemaker, the Bronco, is back. After a year without his face at games and pep rallies, Coach Jessica Watson, as well as other cheer tryout judges, chose sophomore Maisy Inlow for the job.

Inlow worked through the summer to create Bucky’s personality. She choreographed Bucky’s version of more than 30 cheers. She stretched, jumped and learned to become comfortable in the character and in the costume. Bucky has limited peripheral vision so Inlow learned how to see through the mouth and tiny holes in the nostrils.

“Learning how to see through Bucky’s mesh eyes was challenging,” Inlow said. “It took a lot of practice to easily move around.”

Bucky made his debut at Fish Camp in August. He joined in games with incoming freshmen, performed at the pep rally and greeted students around the school.

“It was challenging because at one point the varsity team went to the JV gym to get ready for the pep rally. They forgot to tell Bucky that is was time,” Inlow said. “Bucky was lost and had to find his way all alone. I had to quickly learn to interact with people and get to where I needed to be without a guide.”

Inlow expressed a desire to be the mascot to Watson in Algebra class in the spring. She attended tryouts and the cheer clinic to become ready for the audition. Watson knew another year without a mascot would not be ideal and Inlow’s interest became the perfect solution.

“Bucky allows us to reach a lot more people because sometimes the cheerleaders aren’t as approachable, but when you see this big character it draws people in,” Watson said. “So that’s how it makes [the team] better with Bucky.”

“I think that May’s personality brings a lot to the table because she is quirky which is something necessary for the job,” Watson said. “This is what brings him to life and I think she does a great job at that.”