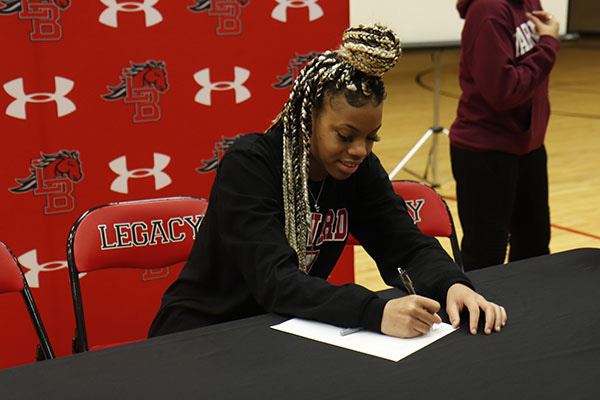 Harmoni Turner: The Journey to Cambridge

Senior Harmoni Turner slams against the ground, knee first. Pain shoots through her body as she moves to the bench. However, the excruciating physical pain does not compare to the terror she feels as she realizes all of the opportunities given to her could have just slipped away. This fear propels her to stand up and try again. Her knee shifts as she attempts to maneuver the court, and the pain forces her to return to the sidelines.

Turner grew up with a love for basketball. She began to play basketball at the competitive elite level since age 8. Since then, her days revolved around basketball. In high school, her days began with a 4:30 a.m. run. She shot hoops during lunch and did not leave the school until she got 1,000 shots in. Afterward, she went home, did homework and went to the gym again. Sometimes, she would take a break on Sundays. 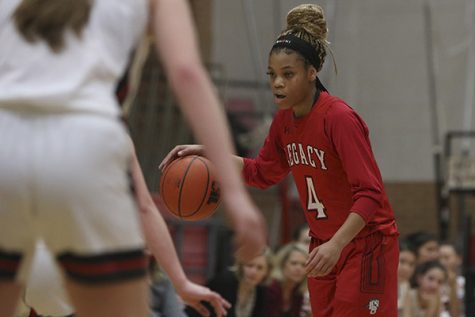 Turner plays in a varsity girls basketball game against Burleson in 2018.

“I’m dedicated because at an early age I knew that God gave me a gift,” Turner said. “Since then I’ve just wanted to take that gift and run with it and see how far I could go. I ended up falling in love with it.”

Organizations recognized Turner’s hard work throughout her life. ESPN nationally ranked her and she is a 3-time USA Trials Invitee.

Turner also founded a non-profit, Harmoni Hoops Academy. Through this program, Turner provided one-on-one training to youth who could not afford high-end trainers. When she was not practicing for her own games, she helped those children in need.

“I was blessed enough to receive that training, but I want to give other kids who weren’t fortunate enough that same opportunity,” Turner said.

With these honors in mind, colleges began to contact Turner during her sophomore year. Top teams such as Harvard, Princeton, Notre Dame, University of Texas, Pennsylvania State and Texas Tech expressed interest in Turner. By her senior year, Turner had narrowed down her list of interest to Texas Tech and Harvard. Girls’ Basketball Coach Michelle Morris looked forward to having Turner lead their team through a successful season.

While playing at a summer tournament, Turner’s feet fell underneath her. She landed on her knee. But despite the pain, Turner felt determined to continue playing. Her attempt did not last long, though, as her knee shifted with her every movement.

“The reason why I went back in is because deep down inside I was still scared, so I wanted to face my fears and do the best that I could,” Turner said. “I was scared of the opportunities that were given to me and I was scared that they were going to be taken away from me due to my injury.”

Turner’s season came to a painful halt once she got her test results. She had torn her ACL and meniscuses, sprained her MCL and had internal bruising on her knee.  She underwent surgery over the summer. As the school year began, her schedule felt painfully empty. The joy she got from basketball and training ceased to exist, and instead was replaced by a painfully mundane routine: wake up, go to school, come home, repeat.

There’s just too much time. I’m not used to this. It was hard to adjust.”

“There’s just too much time. I’m not used to this,” Turner said. “It was hard to adjust.”

Once basketball season began in Nov., Turner watched from the sidelines as her teammates played the game she loved.

“It’s been really tough because I get to watch other people do what I love, but at the same time it’s been a learning experience,” Turner said.

However, Turner learned to find the positives of her situation. She found she could strengthen her IQ toward basketball by watching games from the side. She worked on her non-profit. She had time to explore her college options as well. After a difficult adjustment, she learned to cherish her experience as a lesson in patience.

“I just think that’s it’s a blessing in disguise,” Turner said. “I mean no one ever wants to get hurt, but at the same time you gotta look at the bright side of things.”

Every school that gave Turner offers kept their word, including Harvard. Turner committed to Harvard in the fall and signed with them on Dec. 4. She will attend Harvard University in the fall of 2020 as part of Harvard’s women’s basketball team and will study Business Management with a minor in sports marketing. After college, she hopes to start her own business empire and continue to work on her non-profit. She also hopes to advocate for equal rights.

“I’m about to face the real world which is kind of terrifying. I have to be mentally strong to whatever comes my way regardless of whether it has something to do with basketball or just life in general,” Turner said. “I feel like basketball can help me with a lot of my goals that I’m trying to achieve.”