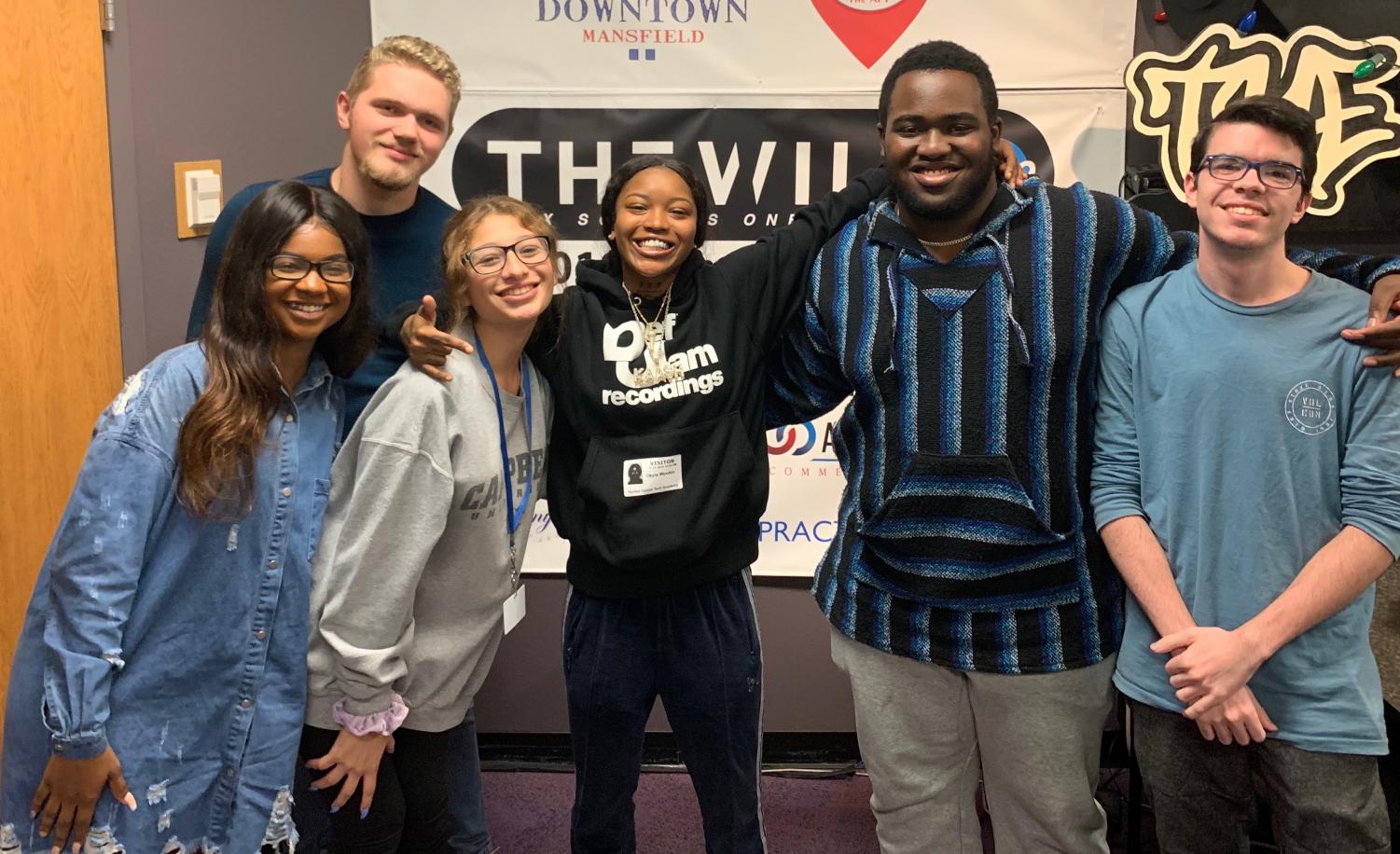 Singer Kaash Paige (center) poses with her old classmates. Paige visited the Practicum Digital Audio class at Ben Barber so the students could interview her. (Photo by Courtesy Photo)

Singer Kaash Paige (center) poses with her old classmates. Paige visited the Practicum Digital Audio class at Ben Barber so the students could interview her.

A year after releasing Love Songs, life for Kaash Paige has taken a complete 180 as she now lives the life she’d always dreamed of. The new artist, who’s now reached #13 on Spotify’s R&B/ Soul chart, has learned a ton about the impacts of success on her road to stardom.

Kaash Paige, former Timberview student and Phoenix Academy graduate, always knew she wanted to pursue music. Though, she never expected to live such a spectacular life.

“After Def Jam reached out to me, it changed my life,” Paige said. “I signed with them, and ever since then it’s been pretty crazy,”

While Love Songs was essentially the track that put Paige on the map, she knew it was a hit from the moment she listened to the finished product. Though, it’s success didn’t go as she’d hoped.

“I remember when my dad first sent the mix back. I called my cousin and we linked up,” Paige said. “Everybody started getting chills- we were like this is the one, this gon’ change your life, and I knew it had the potential to change my life, but not now.”

“When we listen to Fake Friends, it’s a different feeling ‘cause it really happened to me. 64 is like a club banger- when I made that song, I freestyled it and I just started getting different melodies,” Paige said. “I could hear Dej Loaf, I could hear Young Thug, so I was like ‘I’m not anybody right now, so of course I’m gonna have to make myself sound like it.’”

After building a fanbase on SoundCloud early on, Paige revealed that finding the courage to climb to the top wasn’t so difficult once she found faith in herself, and developed the right mindset about her work.

I’m a superstar, and I see my worth.”

“With me, it was more like having that ambition and drive to do the stuff that I do, because I used to be really shy- not confident with my music. I’d drop stuff, but I wasn’t confident, but now I’m ‘Baby Goat.’ I’m a superstar, and I see my worth,” Paige said.

Paige believes her fame was always in God’s plan, and she realizes it’s His way of rewarding her hustle.

“When I started being consistent, not being discouraged and had faith in myself, that’s when God was like ‘this is what I wanted from you all along. You could have been- you were born a star but you didn’t have that light to shine yet, you were still dimming and twitching a little bit but now you found yourself,” Paige said.

She added that the realization of becoming a superstar came when there was no need to put in extra work promoting her music.

“I realized I had it in the bag when I didn’t promote anything, I just always dropped my music on Twitter and people just supported,” Paige said. “They messed with me for being me.”

From her SoundCloud days to now, her biggest supporters have always been the loyal members of her team, comprised of her dearest friends who she considers family.

“Everybody wants to support, but you’ll know when somebody really supports you. My bro Rob, Matt, like my whole team- Def Jams especially, but my family as well.” Paige said.

Teachers and classmates who weren’t as supportive never stood in Paige’s way. Ironically, many of them have come around afterword of her recent successes.

“It was only really two classes that knew I really did music and were supportive, but everybody else was on the wave. Nobody really supported my music, now, they’re superfans.” Paige said.

One thing Paige has learned from becoming an icon is that haters come with the lifestyle and that all many people pay attention to is your social status.

“My eighth-grade year and my seventh-grade year, everybody cared about what you wore, how you talked or how you dressed. It was always like ‘you’re lame’ or ‘you’re a bum.’ I just feel like when it comes to haters, obviously, they’re unhappy with themselves.” Paige said.

“I had to realize when you’re yourself, everybody loves you more. Do you!” she adds.

Paige encourages any young people who dream of creative pursuits to follow their chosen paths and not the ones chosen for them.

“I encourage students to do whatever they wanna do that makes them happy. I feel like parents have a certain path for you, and you don’t have to follow that path because it’s your life- you don’t have to live someone else’s life if you don’t want to.” Paige said.

Lastly, Paige’s biggest advice to people like herself is simple:

“Never give up, always stay consistent, always go hard, and have faith in yourself.”