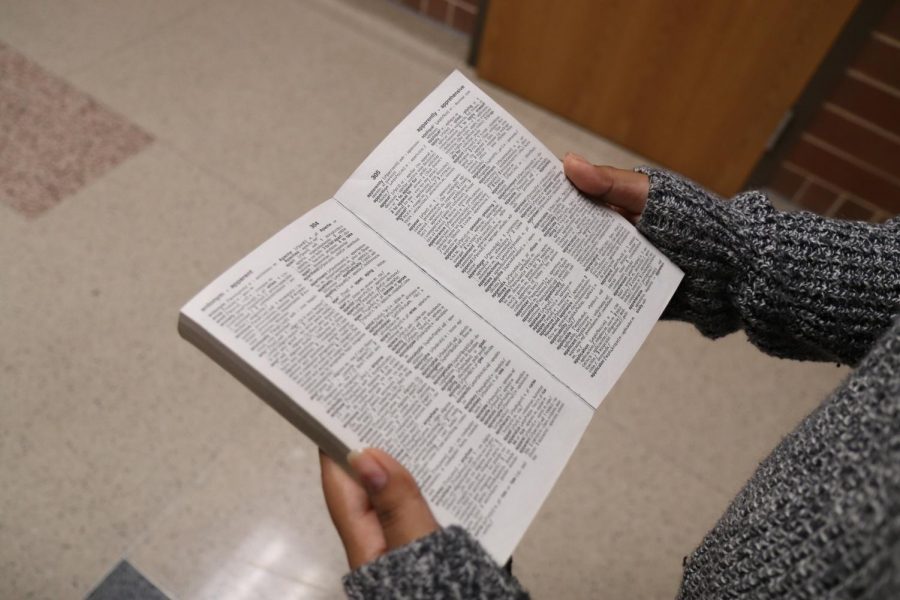 Her nerves consumed her body as she walked into the school with her aunt, neither knowing a single word in English. She had one thing on her mind ‘how can I make her understand?’. For junior Rosalinda Sanchez, it seemed like ELL (English Language Learners) teacher Michelle Alamudun came in as her saving grace to translate for her and her aunt at the front desk. Not knowing English had become her first stepping stone.

She didn’t understand it then, but Sanchez had just taken the first step into a better future.

“In the beginning, it was very difficult because of the language since I didn’t understand the majority of the things that they tried to tell me, but right now I’m doing alright,” Sanchez said.

Sanchez left her home in Acapulco Guerrero, Mexico, to live with her aunt and uncle in Mansfield. Sanchez was born in America, but lived her entire life in Mexico because of her parents’ jobs. When she first moved to America, Sanchez felt depressed and alone because she had a very tight relationship with her mom and missed her. Her parents could not travel with her to the U.S. due to work complications back in Mexico that would not allow them to stay in the U.S, so she lived with her aunt and uncle during her stay.

“Yes. I’m a little depressed because I’m always with my mom, but it’s okay because I know that she wanted me to come over here to strive and be someone in life,” Sanchez said. “And because of that I want to try my hardest and be okay with her”

Sanchez, one out of many ELL immigrant born students in the U.S. but still considered foreign in the system since she does not speak english. According to Colorin Colorado the majority of ELLs enrolled in public school systems were born in the United States.

“In the beginning I was scared of what other people said because I understood the majority of english and people thought that I didn’t speak english. I felt bad because I said to myself, how can they be like that they said ‘why are you here’ and ‘this Mexican’ and I would say no, I’m from here.”

Sophomore Abimael Gonzalez found himself in a similar situation because of the challenges the language brought to them.

“Like I don’t know the language I don’t want to speak it out of embarrassment. Like if you don’t know some things and you say them wrong,” Gonzalez said. “But with my friends, when I’m just talking with them in english we do laugh about not knowing how to say things because we’re learning,”

Gonzalez, an ELL student born in Fort Worth, Texas, came from Jalisco, Mexico, with his family of six because of his father’s job-related issues. Gonzalez said learning English felt like a plus to their current situation that can benefit him in his future. Although their temporary stay in the U.S. won’t last very long, he remains focused on school.

Gonzalez, one of 71.5 percent of ELL students who graduate from high school, compared with the overall graduation rate of 88.3%. To Ms. Alamudun, getting students to surpass the system’s expectations such as average test scores, low grades, and more remains one of her goals every year.

“So ELL is just simply a place where they can get comfortable learning the language, comfortable understanding what the teacher is requiring on them, and understand that they’re not going to get penalized because English is not your first language,” Ms. Alamudun said. “That’s what it’s supposed to do and in theory, it works.”

However, like every system, Ms. Alamudun must face the reality of what happens to her students inside and outside the classroom.

“I’m very much aware as an American citizen that we need everybody to be able to do every different job, but I don’t want ELL students to just be limited to this job, or this skill, or this level. I want them to understand it. You can go beyond me, you can go beyond the principle. You don’t let language be a barrier. You let it be a stepping stone,” Ms. Alamudun said.

For Sanchez, not knowing English inside the classroom and outside of school affected her just as much outside the classroom. She had fears of the barrier that stood between the Americanized society and her Mexican roots.

“More than anything the cultural crash like I grew up in Mexico I have different culture and I was afraid of saying something that someone else didn’t appreciate and then have a problem,” “But I’m not embarrassed of having Mexican roots because they fill me with pride.”

“Even though my other teachers don’t speak Spanish they do the most so that I can understand the lessons and that was truly surprising when I got here,” Sanchez said. “I didn’t expect that I expected them to send me to a corner or for them to be hostile.”

Sanchez only hopes for Americans to change their ways of viewing foreign or immigrant students as time progresses.

“To love people just how they are and that instead of judging them they should support them because if they’re here it’s for a reason  and it’s because they want to learn about this culture and know everything about here,” Sanchez said.