Cross Country Competes in 5A Championship 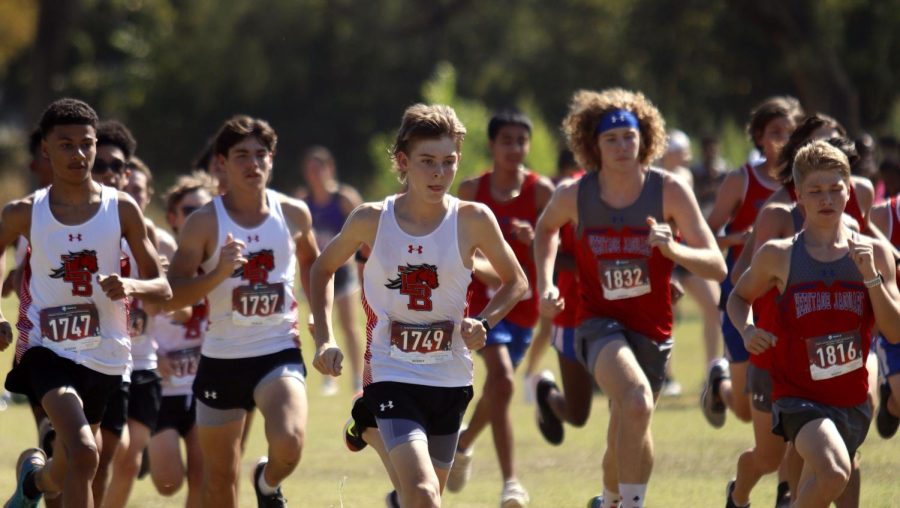 Cross Country athletes run at the meet at Chisenhall Park in Burleson. The boys took third place in the varsity race.

The cross country team paced their way to the UIL 5A-District 8 Championship in Burleson. They filled the rankings placing first for boys and girls in their 5,000-meter run Oct. 14. In the regional meet in Lubbock, the boys placed sixth and the girls placed eighth. State qualifiers included Yosef Abdulrazeq and Ava Cristafuli who will compete Nov. 6.

The cross country team consistently competes at a high level. This year, the girls and boys will take their talents to Round Rock again to compete at the state championship.

“I’m confident that the kids will step up to competition,” Lindsey said. “They earned their spots, and they are great runners also. They belong there.”

Making progress and realizing anyone can always be better is mandatory for a long sport like cross country. However, constant long-distance running can create nagging injuries and has affected runners.

“I have gotten better at almost every meet and I know that I have bigger and better things to come,” Eaton said. “I have been battling some injuries and it hasn’t slowed me down but it’s restricted me from doing different types of things. I am slowly getting back into it and I am just trying my best to keep a good attitude.”

The boys and girls took home first place at the district championship. This currently remains the norm for the boys, but a first for the girls in nine years. This win was a little bit more special than the others.

“Obviously, I was thrilled — that’s the goal to win. I think it’s special because we beat a really good team,” Coach Lindsey said. “Centennial has been a powerhouse for the last few years, and the girls have been trying to win for the last few years and the boys have been defending their title. To win it this year with both groups is something special.”