Playing for a Different Kind of Team 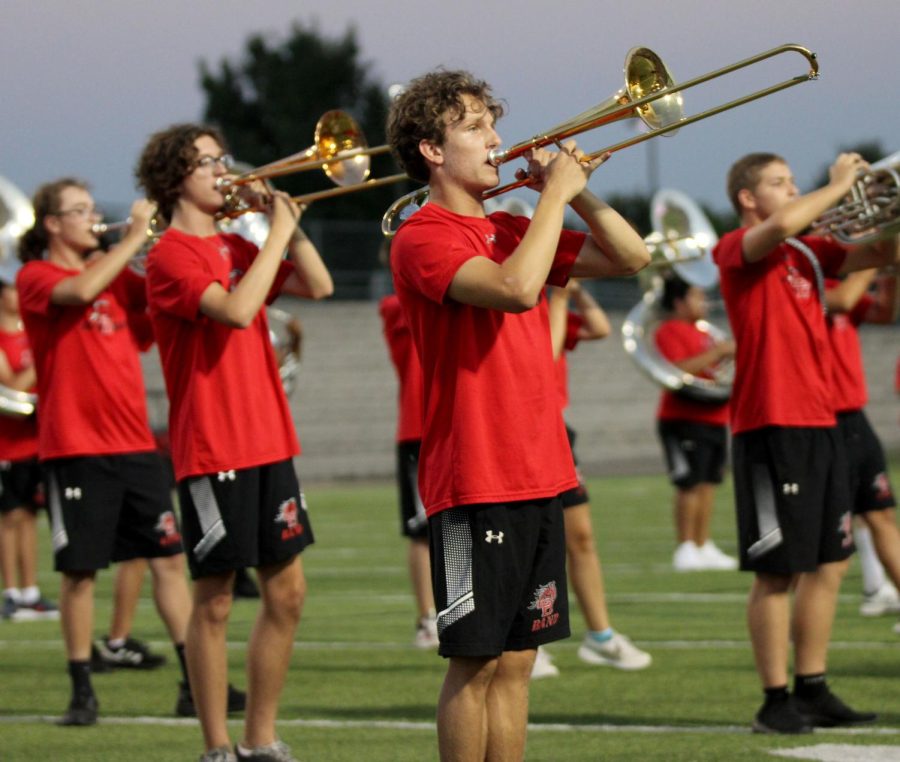 Most people define a team literally. This could be something along the lines of, “a group of players forming one side in a competitive game or sport.” In reality, what makes a group of people a team is more than wearing the same jersey.

In room M103, a different kind of team goes to work every day. This year, 45 band teams across the state worked to make it to the state competition in the 5A classification.

The Legacy band goes to home football games to perform, but the competitive team element of the band often goes unnoticed. Junior Graham Gornall, trombone player, thinks the band is just as much of a team as a sport like football or basketball.

“The team element in band is huge,” Gornall said. “When playing concert music in a group setting, you are constantly listening, cooperating, and adjusting to the rest of the ensemble. It’s very cooperative and without that, it’s not really a band.”

Gornall neared competing for state last year but did not qualify. He looks to improve individually to make state as well as improve as a team. Gornall played basketball and football in middle school and feels that his band directors take similar roles as sports coaches.

“When the band does well, the directors are quick to praise the students,” Gornall said. “When we fail, the directors take the responsibility even when it isn’t their fault. They organize everyone and make sure that everyone is on the same page, rather than standing out. We are all unified and fit in.”

Similarly, over four thousand students in the United States compete in the speech and debate championships. They are regularly competitive and there are over 400 colleges and universities that offer speech and debate scholarships. In debate, there is a cross-examination competition in which partners compete against partners from other schools in a classic-style debate. The team element required is more of a one-on-one connection than almost any other team environment.

“Debate is just as much of a team as any sport,” junior James Edwardsen, debate president, said. “We work together to get better and in some events, we must work with a partner to get across our point.”

Although there are team elements in things outside of sports, sports can be one of the most important and valuable ways to instill teamwork. Players can work together and form the more true version of a team, or they can compete individually which leads to a lack of chemistry and success. Head boys basketball Coach Cornelius Mitchell said chemistry is one of the most important aspects of having a successful team.

“The main thing I preach to the team is to stay connected,” Mitchell said. “The more connected we are, the better the team plays and the more successful we’ll be.”

Another sport where staying connected is crucial in soccer. The Legacy men’s and women’s soccer teams have a reputation of success and this winning culture is a product of their ability to work together. Senior left-back Joshua Omoridion feels that rebuilding last year’s chemistry will be important in their success this year.

“Last year’s team had a ton of chemistry,” Omoridion said. “This year’s team doesn’t have many people that have played varsity before, so we have a long way to go to get back to how it was.”

Whether it’s soccer, band, debate, or anything else, the importance of teamwork is crucial in all group environments. Down to the primitive instinct of working together, there’s nothing more important than a team.