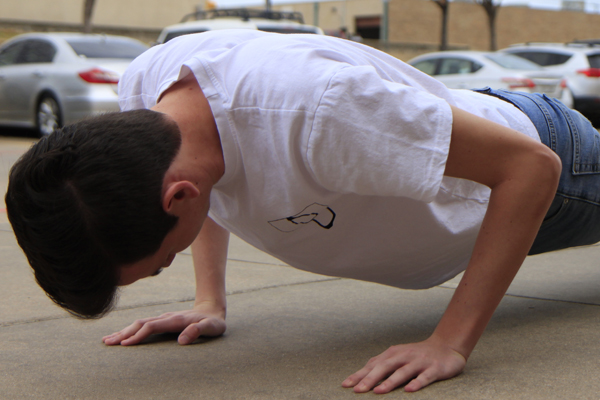 Matthew McCoy, 11, poses for a picture. He demonstrates a certain eating disorder where a person works out more than they eat. (Connor Riley)

Matthew McCoy, 11, poses for a picture. He demonstrates a certain eating disorder where a person works out more than they eat.

Freshman Josh Smith* inhales his food and sprints from the table before his parents even sit down. He locks himself in his room and does push ups and lifts weights at a rapid pace. Smith sees black spots and becomes light-headed. His rapid work out begins to slow down until his knees buckle and he collapses to the floor. Smith smiles at the thought of losing a little of the weight before the black spots fill his entire sight and his eyes flutter closed.

Although Smith has no medical diagnosis of an eating disorder, he experiences the effects of one, as do 30 million americans.

Beginning to accept oneself is a process. Avoiding the feeling of anxiety or depression is not a goal. The goal is to learn how to manage it.”

“If [I] eat it makes me unhappy with myself,” Smith said. “I’ve gotten this opinion that eating too much or eating sugar is bad.”

As he grew up, Smith watched his parents obsess about their weight, go on diets and exercise all the time. At the time he didn’t think much of it, but as he became older the influence of his parents combined with societies definition of the perfect body pushed Smith to not eat to lose weight.

“I hate how socially we’re looked at a specific way and [we are taught that] it’s good to be one way and not as good to be another way and it’s forced on people when they’re young,” Smith said. “I realized that I wasn’t happy with myself [and I told] myself that I had to look a certain way. It’s just what I wanted and I felt like it was what I had to do.”

“I think a lot of people resort to not eating because it is easier than working out and counting calories and going on diets,” Smith said. “I’ll stop eating meals because I don’t feel like it or I’ll just forget to. It just becomes less important to me than usual.”

Approximately 40 percent of people with eating disorders have other co-occurring mental illnesses such as anxiety, depression and substance abuse. Eating disorders can also have physical effects such as dizziness, rapid weight loss or gain and a loss of energy and nutrients.

“Lack of energy physically and mentally [is the hardest part of not eating]. Hunger is no longer a distraction but it becomes something that you just feel,” Smith said. “I’m definitely more confident in the way I look [and] happier that I’m skinnier, but I’m unhappy that I’m doing it the way I am.” 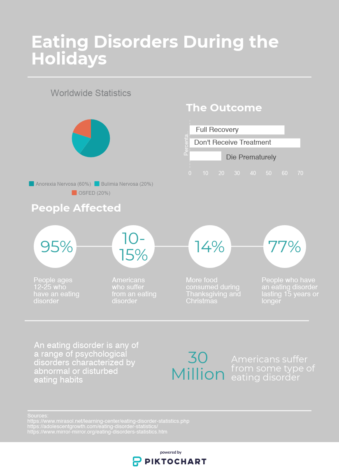 Food-centered holidays such as Thanksgiving and Christmas can cause anxiety and Seasonal Affective Disorder for people with eating disorders. Smith worries about weight gain during the holidays and he obsesses over leftovers and unhealthy foods since his family cooks more.

“It gets worse during the holidays because holidays are focused around food,” Smith said. “When you’re around food more it starts scaring you because the goal is to not gain weight. When you get around holidays it’s really hard to not do that because of the amount of unhealthy foods that are put in front of you.”

People resort to forms of distraction around holidays to help them cope with feelings such as sadness and loneliness. Smith plays games or goes outside as ways to distract himself and focus on something else.

Only one in ten people with an eating disorder receive professional treatment. However, as holidays approach, people with an eating disorder can plan ahead of possible challenges and how to deal with them, stick to a schedule and stay flexible. They also need to know when to speak up about their health, enlist a safe friend to help them if problems occur, try to de-stress and not take comments about weight personally.

“Eating disorders are a serious condition that can lead to very serious medical problems,” therapist Conchita Andrijeski said. “Beginning to accept oneself is a process. Avoiding the feeling of anxiety or depression is not a goal. The goal is to learn how to manage it.”

To help others with an eating disorder during the holidays, do not comment on how much they eat or talk about their looks or focus on food. Stay patient with them and become educated on eating disorders.

“I know it’s really bad and I know that a lot of people do it,” Smith said. “I’m not entirely sure that it can be helped besides having someone there to actually make you eat, but it’s important that it gets better or that you at least try to make it better and that you have someone to help you.”