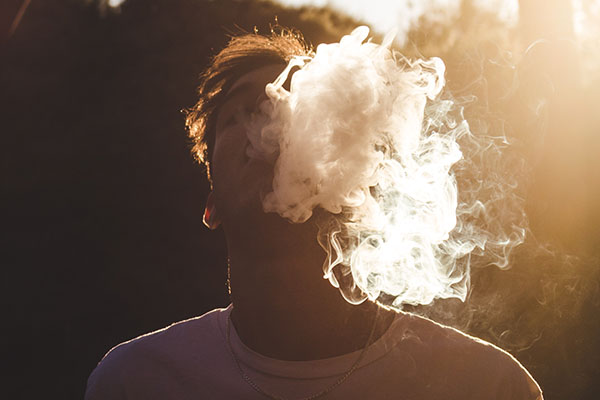 An anonymous man blows smoke after vaping in the sunlight. Courtesy photo by Daniel Ramos on Unsplash.

Photo by Photo by Daniel Ramos on Unsplash

Puffs of flavored smoke surround a group of boys and girls as they lounge in the afternoon behind an unwatched building. Taste buds tingle when they inhale the vapor, and their lungs consume it with every breath. Sophomore Brian Joe* envelopes himself in the crowd and gulps down another cloud of nicotine, silently reminding himself this is all for social purposes. Before he knows it, the sun begins to fall further down the horizon outside of school, and it’s time to go back home, time to slip the Juul pod back in their pockets where no one knows it exists.

The appealing flavors offered for vape pens gains the attention of teens. Studies show vaping damages the brain and other parts of the body. The effects include loss of memory, concentration, learning, self-control, mood swings and slow brain development. These studies have found more risks of lung damage because of vaping. Theater teacher, Sarah Fortune understands how vaping can cause an unfit lifestyle by watching her son experience the consequences.

“From personal experience, I’ve seen what this can do to people,” Ms. Fortune said. “There are health issues on the inside, but there are also external factors. Vaping is something different.”

Medical centers recently reported larger amounts of vaping victims with acute respiratory distress syndrome. This condition causes fluid to build in the lungs and prevents the patient from breathing in oxygen which led to more than 2,200 illnesses and 47 deaths in the U.S. Since Brian Joe quit, his effects are less severe, unlike his friends who continue to vapes.

“Some of the effects can be scary,” Joe said. “[But] some of my friends were doing it, so I tried it.”

Social pressure is at an all-time high for teenagers. They struggle to find their place during high school and middle school. By integrating themselves in a group to vape, they have somewhere to belong. They’ve taken advantage of the accessible product found in standard drug and market stores. Government officials have now found all the more reason to destroy the e-cigarette empire. On Sept. 11, 2019, the government congregated to discuss the issues. Alex Azar made key points in restricting the flavors, raising the age limit and requiring FDA approval.

“I don’t think the new laws are going to make them stop because everyone has already found ways around it to still get stuff,” Joe said.

I do not think that [new laws] will prevent teens from vaping only due to the fact that if people want to do something or use something they usually find a way to make that happen.”

After much discussion with President Trump and other government officials at the White House gathering. The law to “outlaw most vaping flavored products” finalized weeks later. Though the law is set in motion, as a school nurse, Elisa Watkins knows the repercussions of vaping and how teens refuse to give it up even with the government involved.

“I believe that the new laws will make it more difficult for teens to vape and therefore will help lower the incidence of teen vaping,” Nurse Watkins said. “I do not think that it will prevent teens from vaping only due to the fact that if people want to do something or use something they usually find a way to make that happen.”

Though the law is expected to have a positive effect overall, Nurse Watkins and Joe stand with others who are not in agreement. The Vapor Technology Association Industry Group called vaping a “public health travesty,” believing that, with the ban of vapes, people will revert back to cigarettes, which are considered more critical. However, despite the few that are wary of the practical implications of the new changes in the e-cigarette industry, the nation proves to have one common goal – to stop the vaping epidemic that seems to consume our nation in a puffy, fruity flavored haze.

“This [vaping] was labeled as the ‘safe’ option,” Fortune said. “It gave teenagers permission to smoke, but it’s not the safe option anymore.”