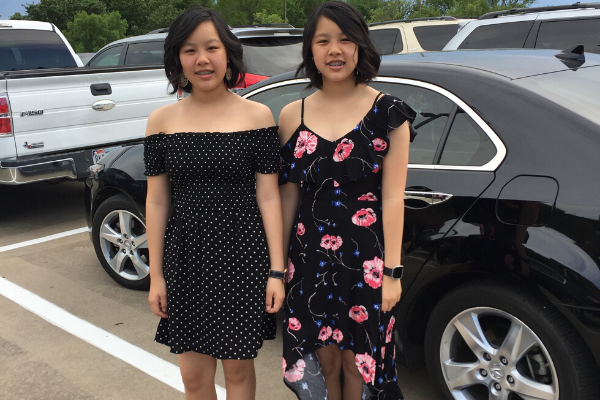 Sivong and her twin sister pose in the ACA parking lot before their eighth grade graduation. (Courtesy Photo)

Sivong and her twin sister pose in the ACA parking lot before their eighth grade graduation.

As the sun rose, breakfast sat on the table and ironed uniforms were laid out on the couch for sophomore Jadyn Sivong. Backpacks weighed down by books and folders were slipped on in a rush. She heaved a quick sigh and walked out the front door to leave for another day at her charter school, Arlington Classics Academy (ACA).

“When I first came to ACA, I hated it cause I had to make new friends and I struggled to keep up,” Sivong said, “but as I got older, I really appreciated going to ACA. It’s a good school and it gives students a good challenge.”

The summer before their freshman year, Sivong, along with her friend sophomore Blakley Canty, made a decision in transferring from a charter school to a public school. They went through the necessary steps by transferring transcripts from ACA to Legacy and buying the proper supplies for public school. Eventually, they made their schedules and prepared for the upcoming year. The waiting to be in a “normal” high school finally came to an end.

“I was excited to start something new and different,” Canty said. “To be able to wear whatever I want and make new friends.”

“I loved being at a charter school,” Canty said, “but going to a public school meant I had more freedom in a sense because they aren’t as strict.”

I loved being at a charter school, but going to a public school meant I had more freedom in a sense because they aren’t as strict.”

Up until their eighth-grade year, the girls were pushed to the limit with piles of classwork and homework. They were confined by strict rules regarding dress code and activities. Charter schools prep students for the rigorous demand of college academics. Because Sivong and Canty had the opportunity to take advanced classes at ACA, on level classes at public school were filled with upperclassmen.

Because of their previous fast-paced education, the girls entered high school ahead of most of their peers. In their freshman year, they walked in with the credits of sophomores and were able to take older classes such as chemistry and Spanish lll. However, despite being ahead and the opportunities that came with it, Sivong and Canty could not wait to experience public school.

“[Legacy] was so much bigger than ACA. I was worried I was going to get lost and not find my classes,” Canty said, “and the hardest thing about transferring from a charter to a public school is the amount of people, and how different they are and the structure of school is.”

The idea of becoming a part of something such as joining clubs and attending football games tempted Sivong and Canty into leaving ACA. After all, charter schools often become non-profit and hold their students to a higher standard of education than public schools. This limits students’ opportunities for more activities to participate in. Charter schools also have notably smaller sizes, consisting of only a few hundred kids instead of thousands like public schools.

“For me, it was hard [to make friends] because back at my school, everyone knew each other, and I’m introverted,” Sivong said, “so it was hard for me to talk to people who are new to me.”

The way ACA ran their school created a large separation for Sivong and Canty in understanding how public school worked. Walking through new hallways with different people, the anxiety piled up, normal for new students. In the U.S alone, 49% of teenagers stress about school for the first day.

“I was a little nervous because it was so different from my old school,” Sivong said.

“I loved it at ACA, I had a lot of friends and we got to go on field trips,” Sivong said, “but I like my school now because I feel like I have more freedom. I can make mistakes, and I’ll be okay.”