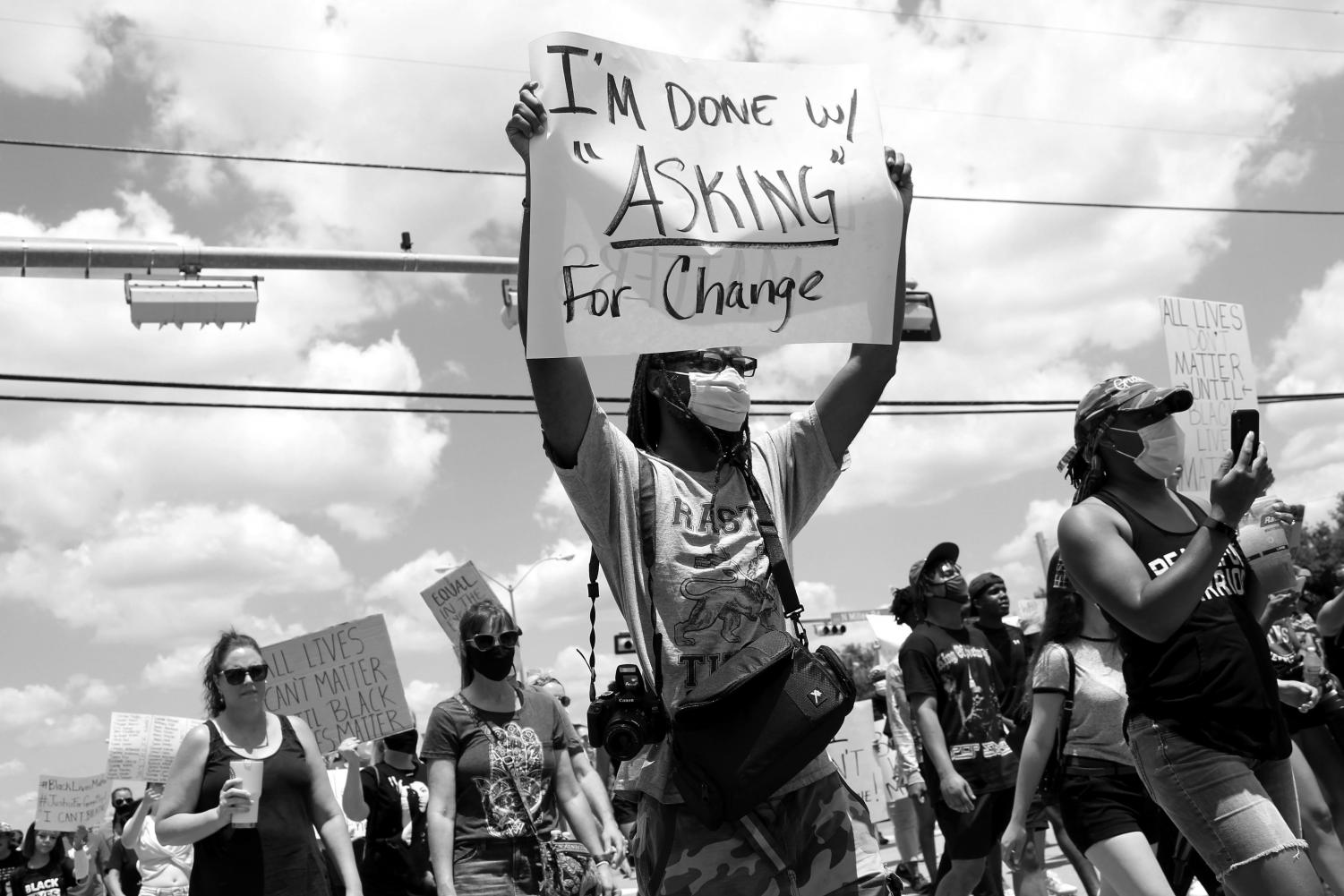 On June 5, 2020, thousands of protestors gathered at Mansfield High School, and marched down to City Hall to speak up against racial injustice in America. (Landri Hargrove)

On June 5, 2020, thousands of protestors gathered at Mansfield High School, and marched down to City Hall to speak up against racial injustice in America.

Black Lives Matter: Not A Moment But A Movement

Under the heat of the sun, Black Lives Matter supporters held up signs and yelled chants in remembrance of lives lost because of police brutality. George Floyd died in Minneapolis after a police officer handcuffed and restrained him with force for 8 minutes and 46 seconds — he died repeating the words “I can’t breathe.” After his death on May 25, protests launched the following day in all 50 states and several countries such as Belgium, England, Brazil and more.

On June 5, more than 1,000 people gathered at Mansfield High School and marched to city hall to protest Floyd’s death and the prominent racial injustice and systemic racism that affects minorities. Organized by the Mansfield High Black Student Association, the turnout shocked the BSA members including MHS senior Samone Jones who organized the protest.

“I was literally amazed at the turnout. I never expected it,” Jones said. “I think this will influence the community to speak because I believe that it is so important to make sure your voice is heard.”

Seeing smaller impromptu protests in Mansfield motivated Jones and her fellow BSA members to organize a larger protest. The protesters marched from Mansfield High School along Broad Street west to city hall. Mansfield’s history acted as a catalyst for the massive response to the protest. Although not everyone agreed with the message of the protest, Jones persevered, used her voice and pulled off a historic event. At City Hall, organizers spoke, sang, prayed and observed a moment of silence for George Floyd and other black lives lost. In the crowd of protesters, people shed tears, led chants and cheered on the speakers.

“I am just spreading awareness, and I will continue to protest and be black with no sense to it,” Jones said. “Experiencing racism myself in Mansfield, I feel like it is very important that we get out here, voice our message and stay as positive as we can.”

My life and others’ lives just like mine encouraged me to speak up and not just sit around.”

Attending a predominantly white school, Jones reflects on several microaggressions and racist tendencies that guided her to join the BSA. Although Jones found her safe space at her high school, the same does not apply to Legacy junior Dayna Lang who constantly feels judged.

“I feel like at Legacy you are always going to be talked about and stared at when you try to be who you really are,” Lang said.

Fueled by the frustrations of struggling with her identity and the anger of fighting for basic human rights, Lang used her voice the only way she knew she could. She took it to the streets and used her voice not only for herself but for other black people and marginalized groups.

“My life and others’ lives just like mine encouraged me to speak up and not just sit around,” Lang said. “The first step in ending all of this is making them listen to us because they obviously don’t care, but protesting peacefully has helped a lot.”

The fight for equality, to Lang, remains a cooperative effort on the sides of black people, other people of color and non-people of color. She recognizes that allies help the movement, but believes performative activism does nothing but satisfy individual guilt.

“I really wish people our age would stop thinking that reposting a few posts on their stories is doing enough because it’s honestly not,” Lang said.

The line between performative activism and true allyship proves difficult to bridge, but Legacy senior Micah Donathan tries her hardest to uplift black voices while also using hers.

“Systemic racism is still a big problem, not only in America, but around the world, and as a white person I believe it’s important to listen to opinions and ideas from the black community when it comes to this issue because many have experienced it firsthand,” Donathan said.

With the rise of zines that raise awareness and share resources on social media, it seems easier to keep up with all the news on social injustice. This, in turn, makes it easier for anyone to dub themselves as an ‘activist’ by sharing a protest flyer or an allyship infographic. Although this does not invalidate any form of awareness, Donathan believes in doing what she preaches. This led her to put down her phone and pick up a sign.

“The news can be misleading, so I went to a protest to see for myself what people are actually protesting for and saying,” Donathan said. “It was a very empowering experience and I felt that positive change is for sure coming if so many people from all different races and ages could come together against the same thing.”