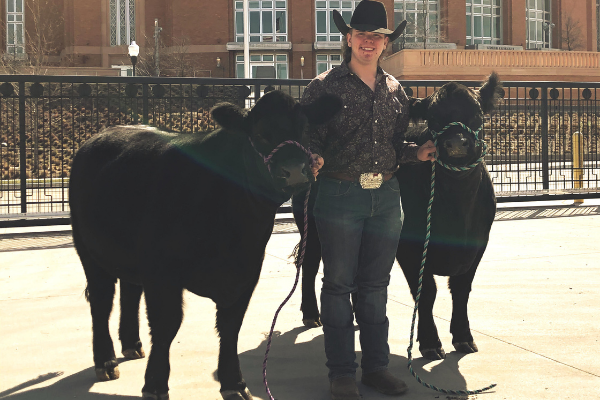 Noises of all kinds floated out of the stables as senior TJ Huff made his way around the barn. His boots crumbled the hay beneath him as he made his way to his heifers. They greeted him with soft moos as he checked on them, all the while thinking about what happened in the past few months.

“How I felt about things changing is it really hurt my routine and my show heifers’ routine,” Huff said.

This year, Huff maintained a new routine by waking up early every morning to check on his heifers and feed them before he left for school. He’d go back to the show barn afterward to condition his heifers for upcoming shows that hadn’t been canceled. They continued to prepare for the upcoming events, even though Huff knew it wouldn’t be the same.

“COVID-19 did not really change anything for our cattle show team except they did cancel some of the major shows that we go to every year,” Huff said, “which, as a senior that kind of sucks because I did not get to compete, but it’s okay, we still have more to go.”

FFA struggled to attend competitions since things began to cancel on them. Team meetings and some competitions took place online, they didn’t travel and masks were required when showing. Senior McKayla Riley, vice president of FFA, also suffered the same consequences that Huff experienced.

“I just kind of went with the flow,” Riley said, “I did what I had to do to get things done and be successful.”

Riley knew that as a member of such a sport required a lot of flexibility in the new season. She still participated in goat tying, placing in finals. Huff on the other hand competed in cowgirls in cowtown at the Fort Worth stock show grounds to show his heifers.

“My favorite moment this year was by far being the only guy at our county show to make top five in showmanship for Tarrant County,” Huff said.

FFA, like any other club and sport at Legacy, underwent a series of limitations to the activities they wanted to participate in. Not being able to engage in as many shows or meet in person as often proved to be hard. Yet, despite the obstructed time they’ve had this year, they still accomplished some team moments together.

“High school rodeo is super fun,” Riley said, “honestly I’ve still made so many memories that I wouldn’t have made if I didn’t join the team.”

Triumphing through the hoops of COVID-19 resulted in bringing home many wins for FFA. They succeeded in showing all of their goats, sheep and heifers. Competitions canceled and shows dispersed, but FFA stayed vigilant in continuing their passion even in the pandemic.

“Being a part of FFA is like a family because you get to see the people you like the most every day,” Huff said, “they’re not just friends, they’re family because they get to go with you to every show you do get to go to.”